Oblivion gets reviewed by Mark

Plus the poster also gets redesigned by Mark 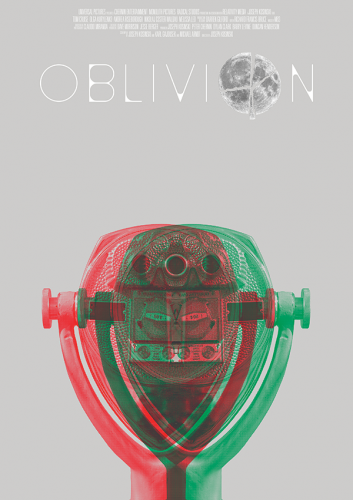 Movie monster Mark Gamble is back, and this time he’s been watching everyone’s favourite pint-sized Scientology god pretending to live in the future. Here’s what Mark makes of it all…

What’s It About: Sometime in the distant future, Earth has been attacked by an alien race (the Scavs). Humanity won the battle, but with our moon destroyed, earthquakes, freak storms and just about every other natural disaster have left our planet a desolate wasteland.

With most of the the surviving civilisation now living on one of Saturn’s moons, Jack Harper (Tom Cruise) is now one of a few inhabitants remaining on earth, stationed there to repair drones. The drones are there to protect machines harvesting the last of earth’s resources. Sounds boring, huh?

When one day a spaceship crashes, with a lone survivor onboard, Jack begins to realise that not all is what is seems. And then things just get more and more confusing.

Visually, Oblivion is stunning. Beautiful even. This isn’t surprising, when you predominantly film in Iceland. The barron landscapes and remains of some of the US’s most iconic landmarks look fantastic, and you can genuinely believe this world exists. BUT, a beautiful film does not a good film make… or something.

Cruise is as reliable as ever, and Riseborough is shaping quite a decent career for herself. Both play their roles well, it’s just a shame the plot takes away from those performances. The film mixes a number of tried and tested Sci-Fi clichés, that you’ll have seen used in more successful movies from the last decade or so. Ultimately though, they’re the cause of a story that ends up making little sense at all. Add to that, the film feels long. If you actually manage to stay interested in anything other than the scenery, the plot still leaves you thinking “Huh?”. I don’t want to say too much, for fear of giving anything away, but everything that happens post Jack’s encounter with Morgan Freeman’s character, feels like it could have been more successful had the writers just kept things simpler. Being clever and trying to be clever can be the downfall of a potentially good thing.

Musically, on a personal level, I was pretty disappointed with M83′s musical score. It should’ve helped carry the film, and could’ve been a great pairing, but it lacked any real atmosphere. There was a distinct lack of Gonzalez’s soaring melodies, and the moments they do appear are almost on the level of a parody Blade Runner soundtrack. Shame.

Finally, and I have to mention it, there’s the Scientology themes. Do they exist? Maybe. Self sacrifice, redemption and a heightened belief in oneself (of God like proportions) run throughout the film. Without them, the film would lack any meaning at all. With them, it gives the film a convoluted and preachy message.

Summary: A slow, but interesting first half. A slow, boring and confusing second half. Beautifully crafted, visually stunning, with some good performances from Cruise and Risborough. Ultimately, it’s let down by too many confusing and messy plot holes / twists. If a great movie like Moon had sex with a blockbuster like Independence Day, and Prometheus watched, this would be the bastard child.

10 excellent memoirs you should probably read (if you want)
Scared of losing your job? Don’t be scared, it can be GREAT!