Spring Breakers gets reviewed by Mark 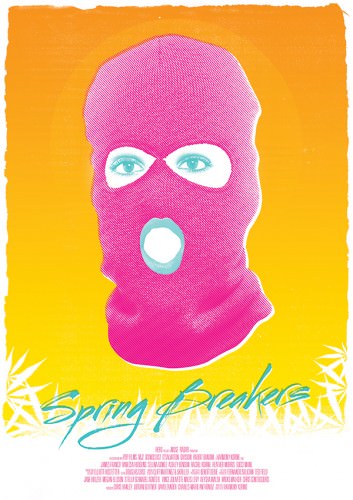 It’s always a pleasure to welcome a new writer to the Interestment fold, so go berserk for Mark Gamble. He likes design, he likes movies, so he’s mixed the two by writing reviews and designing hot new posters at the same time. Both of which are excellent. Here’s Mark’s take on Spring Breakers, starring James Franco and some beautiful women in barely any clothes…

What’s It About: 4 friends rob a restaurant to fund a trip to Florida for “SPRING BREAK!!! WOO!!!” With a suitcase seemingly packed full of nothing but bikinis, the girls go wild, on a weed / coke / alcohol fuelled adventure. After a run in with the law, they meet Alien (James Franco), a white, cornrowed rapper, hustler and straight up gangsta. From then on things quickly go down hill, whilst simultaneously escalating. It all ends pretty ridiculously. Oh, and James Franco performs an amazing piano rendition of Britney Spears’ ‘Everytime’.

Thoughts: If you’ve gone into Spring Breakers on a whim, sold into what looks like a fun, teen comedy, thanks to Hudgen’s and Gomez’s Disney grins gracing the poster, you could be forgiven for hating this film. Maybe. Except it’s got an 18 age certificate, and James Franco is waving a gun in the air, and all 4 lead girls are wearing nothing but VERY small bikinis. However, if you’ve gone into the film knowing anything of Korine’s previous work, you’ll be expecting much of what follows.

People will argue that the film’s nudity, alcohol consumption and drug use is gratuitous… the film is called Spring Breakers. I grew up in the rural English countryside, so this is exactly what I expect Spring Break to be like, though I could be very wrong. There isn’t much here that hasn’t been shown in a host of gross-out teen movies over the last decade.

Plot wise, it’s nothing original and doesn’t really push things. However, where it risks being completely linear, Korine introduces cinematic devices which add some much needed depth to the film, non existent otherwise. We cut to and from moments in time, yet always know where we are. The drug induced moments have some great treatments to them, and all in all, I loved the cinematography. Voice overs of the girls calling home, to say how they’ve “found themselves” and James Franco whispering “Spring break…” pepper the film. As well as a gun shot at every given chance – one of the less successful (annoying) sound design elements.

The film is complemented with the best musical score since Drive, through Cliff Martinez and Skrillex. It actually pains me to say it, but in this case, the asymmetrically shaved Skrillex’s music fits the films imagery and tone, perfectly. Then there’s Franco’s piano rendition of Britney Spears: Ridiculous. Amazing.

The cast put in some solid performances, but with little dialogue and not much needed in the form of acting, other than smoking, snorting, sipping and stripping. Gomez’s Christian not-so-do-gooder and Franco’s hustler really stand out. Gomez puts in a very convincing performance, and I actually cared for the safety and well being of her character. Franco is straight up ridiculous, horrible, but likeable. As for the others, I couldn’t have cared less.

With all that said though, and seemingly negative, I thought Spring Breakers was fantastic. Stylistically, the best looking film of the year, so far. It might not push any narrative boundaries, but it does enough to keep you engaged with what it has, and it’s delivered brilliantly.

Summary: Incredibly stlyish, sometimes repetative, but ultimately a beautiful and fun black comedy. Although, you might end up leaving thinking “How were 10+ gangsters all such bad shots, against a couple of girls?”.

Watch If You Liked / Avoid If You Hated: Drive, Kids, super slow motion

Rating: 8 balaclavas out of 10