Including one by this guy 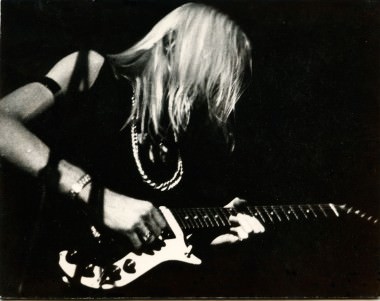 Fact 1: Nothing looks cooler than a grown man biting his lip and flapping around on an invisible guitar in the middle of a crowded dance floor. Fact 2: Excellent guitarist, singer/songwriter, and friend of the site Will Phipps has excavated the unending world of great guitar solos and come back with some absolute corkers and a few words to say about them. After you’ve had a butchers, I strongly urge you to visit Will’s website and sample his wares. The cat can play. No doubt about it. He’s got a bit of a Nick Drake thing happening to.

Johnny Guitar was way ahead of his time, this track was recorded in 1903. He was a big influence on Jimi Hendrix and gave a wild show, wearing crazy clothes and totally freaking out on his guitar!

Nick plays really sweet acoustic guitar instrumentals and is signed up with Tompkins Square Records, home to other great contemporary acoustic pickers like James Blackshaw, Jack Rose and William Tyler. All of Nick’s music can be found on Spotify.

Whoever added this video commented that this guitar playing could kill somebody; they aren’t wrong! this is some seriously heavy guitar playing! These guys were from Switzerland and were around in the 70s.

This solo by Roy Buchanan is one of the finest pieces of guitar playing I think i’ve heard. I never heard a guitar cry like that! There’s not much more I can say about this tune, apart from it’s a real shame Roy is no longer with us, though he will always live on through his music.

Sir Richard Bishop is a contemporary guitarist from the USA. This song is crazy, it makes interesting use of Turkish and Egyptian picking styles and rhythms and some would say it even has shades of death metal. Whatever it is, it’s an amazing piece of guitar playing.

I’m Yours and I’m Hers – Johnny Winter

I never tire of hearing this track, Winter’s vocals are insane as well. He plays with real intensity and power. He is still around and touring soon. This whole album is ace, it’s just called “Johnny Winter”.

You got to forward into about 1.05mins of the track, as this is a live take. It’s one of Billy Gibbons meanest guitar solos, not only the guitar lead intro, but the actual guitar solo later in the track is insane. Early ZZ Top is well worth checking out if you like hearing electric blues rock – albums like Deguello, Tejas, Tres Hombres and their First Album will not let you down.

Recorded in the 1930s, this isn’t so much a guitar solo, but is some of the most sophisticated pieces of guitar playing i’ve ever heard, as well as being one of the most beautiful blues songs you’re going to hear.

Boubacar comes from Mali and his rhythmic playing is hypnotic and extremely chilled out. It often sounds like 3 or 4 people playing the guitar, he’s one of the finest pickers around and you can catch him on tour.

It’s hard to believe this is a guitar, Debashish is playing it more like a sitar. It’s such a trancey piece of music, I would recommend this if you need to relax. I am pretty sure this music induces an alpha brain state, which can’t be bad.

One Response to 10 Incredible Guitar Solos