The 50 Best Movies I’ve Ever Seen PART ONE

Including this uplifting comedy… 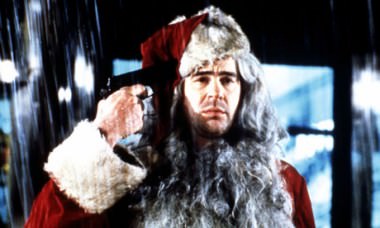 You only realise just how many hours of your life you’ve spent comatose on a sofa staring at a screen like a bearded goldfish when you decide to compile a big list of your favourite films. Fifty sounds like a lot, but it totally isn’t. It turns out I’ve watched hundreds of the things, possibly even thousands of millions, so whittling it down to a top fifty was like Sophie’s Choice, only with loads and loads of movies instead of children. It’s been a painful, tearful process but I’m amazing, I did it, and here are the first 25 with another 25 not far behind…

Saturday Night Fever (1977)
By far and away the greatest swishy disco movie you’ll ever dance along to, but this is more than that: it’s also a ripe commentary on religion, sex, pronounced chin dimples, and gangs of lads aggressively pelvic thrusting in front of girls. Travolta’s finest hour, with the possible exception of Pulp Fiction which was his actual finest hour.

Angel Heart (1987)
I’m not a fan of horror films, mainly because my mind is a precious flower and also because I get frightened really easily and can’t sleep if I’m scared. But this one has to make the cut. Rourke, De Niro, souls being sold, disturbing sex scenes involving blood and incest, loud heart-beating noises, Lisa Bonet being all nipplely. It’s got the lot.

Body Heat (1981)
The sweatiest movie ever made. William Hurt is oozing beads from is forehead and armpits throughout, occasionally a long film coats his top lip, and Kathleen Turner takes all of her clothes off to reveal a gorgeous glossy body. Of course, she then went on to play Chandler’s DAD in Friends.

The Breakfast Club (1985)
The forensic study of high school life in the 1980s, the late great John Hughes puts a douche, a Prom thing, a fuckwit, a nerdoid, a longhair and a pukebucket into a petri dish and prods them all with a pippette. The results are amazingly intense.

Vanishing Point (1971)
I have no real interest in cars, in part because I can’t drive, but also because I have literally no money. Yet if you plonk me in front of this road movie about some dude driving across deserts for no apparent reason, I’ll be the guy with his shirt suddenly off shrieking for him to GO FASTER. FASTER!

Planes, Trains and Automobiles (1987)
I was torn between this and Midnight Run, but in the end I went for this on account of me much preferring it to the other movie. John Candy’s all fat and cute, there’s a funny scene where he’s basically sleeping with his hand up Steve Martin’s arse, and at the end it’s been known to make me weep genuine tears from my eyeballs.

Southern Comfort (1981)
This is a bit like Deliverance without the section about the pig with the bumming. Plus Keith Carradine is in it and he’s by far the coolest person you’ve ever met. Unless you haven’t met him.

Crimes and Misdemeanours (1989)
I’m a big Woody Allen fan, I like the way he shrugs his shoulders and says things like “relationship schmelationship” or “holiday schmoliday”. I also like the jokes that dare to veer outside of saying one word and then saying it again with a “schm” sound shoo-horned in. He’s a diverse and enriching film maker, and this one’s got everything: jazz, nervousness, lots of angsty bits, Martin Landau looking very much like a Munster.

Grave of the Fireflies (1988)
This is a cartoon about two kids basically starving to death, and while that sounds absolutely hilarious, don’t be fooled – it’s very moving. Seriously though (removes enormous joke glasses) you should watch this immediately.

There Will Be Blood (2007)
I’m not normally a sucker for big bulldozing acting work, but holy shit Daniel Day-Lewis in this is fucking ridiculous. And that’s ridiculous in the way rappers say it, like when it’s good.

Apocalypse Now (1979)
Like all tough guys with large penises I’m a sucker for a war film, and Vietnam is still the grooviest war ever fought. Everyone got wasted, listened to the Stones and shot shit up. And then Dennis Hopper only turns up to blow everyone’s minds, man. Far out. Far fucking out. Far far out out. Far out.

Rumble Fish (1983)
From one Francis Ford Coppola movie straight to another one one, this features the second or third best cast of all time in: Matt Dillon, Mickey Rourke, Dennis Hopper, Diane Lane, Cage, Fishface, the other Penn, a guy with glasses, Tom Waits, a feathery haired lioness. Plus it was filmed in pretentious black and white, which makes it very meaningful to a teenage version of me who enjoyed smoking Gauloise.

Trading Places (1983)
I’ve taken to watching this every Christmas because the scene where Dan Aykroyd eats salmon through a Santa beard and then tries to kill himself in the rain is very Christmassy. Plus there’s the bit with Jamie Lee Curtis’s boobs that basically changed the whole course of my life.

When Harry Met Sally… (1989)
Billy Crystal says a bunch of set ups and punchlines then Meg Ryan pretends to be enjoying a spectacularly good poo in a cafe. Result: one of the greatest romantic comedies of all time.

The Warriors (1979)
If you’ve ever stood in front of a full length mirror wondering if you’ll ever manage to look truly tough in your brown leather waistcoat, here’s your answer, and it says yes, if you really work it you’ll look menacing as fuck in that thing. The opening sequence of this film finds various street gangs hopping on New York’s version of the tube and it’s one of my favourite scenes ever.

Hannah And Her Sisters (1986)
Michael Caine does an amazing Michael Caine impression, then Ming the Merciless from Flash Gordon spouts confusing riddles about art and literature before getting off with much younger women. Woody Allen at his zenith.

Mallrats (1995)
Kevin Smith films are a bit hit or miss, but when I first saw this it was a HIT, I adored it. I still kind of do, but fractionally less. Some of the characters try to cram too many words into a single sentence, and everyone seems to be constantly quipping which can be exhausting. But that’s splitting hairs, it’s great, Ben Affleck’s in it playing against type as a total dick, and Jason Lee is a revelation.

Weird Science (1985)
The story of Frankenstein if Frankenstein was a professional teenage masturbator and his monster was a steamy English model with massive hair. Also stars Robert Downey Junior, the one who was in Aliens, a blonde, a brunette, and the guy from The Hills Have Eyes.

When We Were Kings (1996)
I’ve never watched an entire boxing match for the simple reason that it’s booooring and always shown at the time of night when I’d be either asleep or dinner partying. Yet this documentary charting Muhammad Ali in Africa biting verbal chunks out of George Foreman is astonishingly good and beyond riveting. After the shock loss Foreman went away and reinvented himself as the creator of small ovens.

Pulp Fiction (1994)
Quite probably the best movie I’ve ever seen on the big screen, after I watched it I immediately bought the soundtrack, hung the poster up in my student house, grew some jheri curls, and pontificated endlessly on the merits of fast food. You might say it temporarily turned me into a twat. Or you might say it did that permanently, depending on how you feel about me.

Point Break (1991)
In his best film since Dirty Dancing, Patrick Swayze says deep things like “to truly understand your own chakras you need to be able to surf well” or “man who pick up stray dog get wet leg” while Keanu Reeves trundles around with his mouth open holding a gun.

Boyz N The Hood (1991)
Being a middle class white boy from Oxford England, rap music has played an enormous part in my cultural development, and from the swathe of early 90s hip hop movies including fellow greats like Menace II Society and Juice, this one still has by far the warmest vagina. Figuratively speaking.

The Empire Strikes Back (1980)
Everyone went berserk over the state of the prequels, but they forget that Return of the Jedi was pony, and big parts of Star Wars just featured Ben Kenobi muttering inanely to no one in a cocktail lounge. Of all the Star Wars movies, this is the only flawless one.

Goodfellas (1990)
I realised that I couldn’t do this list and not include Goodfellas. Everyone includes Goodfellas, so now I’ve done it too. I’ve done it at the expense of Scarface on the grounds that it’s a much better gangster film. Like the whole world, I like the bit with the garlic and the razor blade and everyone going “fuggedaboudid!” at each other.

My 10 favourite songs RIGHT NOW AT THE MOMENT!
The 50 Best Movies I’ve Ever Seen PART TWO