10 Intriguing wedding rituals from around the world 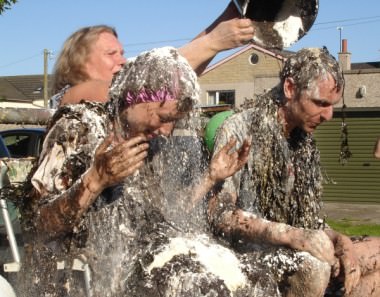 Weddings tend to be a bit barmy at the best of times – if you’re not dodging the tearaway kids skidding along the freshly polished floor, you’re hiding from Great Aunt Elma and her love of the two-man conga. Chuck in the odd bizarre ritual or two and you’ve got yourself a traumatic memory you won’t be able to shake off until you’re at death’s door. Below are some of the more wackier wedding rituals from around the world.

Blackening the Bride, Scotland
Scotland gave the world bagpipes and the kilt (or, let’s cut to the chase, a man in a skirt), so we really shouldn’t be too surprised that it’s the first country to make it on to the list. Dating back to Medieval times, the Blackening of the Bride is a pre-ceremony tradition involving a bucket of gunk and a rather anxious looking bride – and sometimes, depending on who’s administering the blackening, the groom as well. But you’d be anxious too if you were about to be splattered with a vile concoction of curdled milk, eggs, out-of-date curry, rotting fish, mud, flour and soot. That’s it, right? Wrong. Whilst you’re still reeling from the cold rotting yoke running down your face your lovely friends throw feathers in to the mix. So now you not only smell like a dead chicken, you also look like one. To cap this humiliating hazing off, the bride is paraded around town to a chorus of the townsfolk banging pots and pans before, finally, both bride and groom are pushed into the sea (the Isles of Orkney and Aberdeenshire are the two most common areas for a blackening). What’s the purpose of this madness? Blackening is a grounding tradition – the idea is that by humiliating the couple the most they have ever been humiliated in their life, this prepares them for the hardships and humiliation that comes with marriage. In short, if you can make it through this and still have respect and union, you can make it through anything. All in all, quite a nice sentiment – if you take out the soot, eggs, fish, flour, feathers…

Log Sawing, Germany
Not many men can carry off the beard and braces look, but the lumberjack can. And the lumberjack would be the perfect marriage mate in Germany – especially if you want to impress the new in-laws with your tree sawing abilities. In many German weddings, after the vows and before the drinking, the newly weds are presented with a Black and Decker style framework with a massive log mounted on top. Taking either end of the saw, the happy couples must heave and ho until the log is cleft in twain. You don’t have to have studied metaphors at school to work this one out –  by working together, you can get through any thing. The clever couples bring a chainsaw to the party.

The Crying Custom
Tears of joy are quite a common occurrence at weddings. But crying on and off for an entire month before the wedding day has even started should set alarm bells ringing. Not so for the Tujia tribe of central China. To not cry before a wedding is seen as a massive weakness and so women take on the task of non-stop waterworks for an entire hour thirty days, twenty days and ten days before the ceremony. The bride is joined by her mother with twenty days to go and her grandmother, aunts, sisters and cousins with ten days to go – all in a massive team cry. On the actual wedding day, the bride must do a rendition of ‘The Crying Marriage Song’ – weeping in differing tones before being judged by the gathered tribe for grooming, intellect and virtue; the more melodic the crying, the kinder the judging. The crying ritual is said to bring good luck to not only the new couple but the tribe as a whole. The customs originates from the Warring States Period (475-221BC), when a princess of the Zhao State was wed off to a prince of Yan State. Upon her departure, her mother wept at her feet for several hours. Up until the early 20th century and throughout the Qing Dynasty (1644-1911) the custom could be seen in China’s Sichuan Province but it has since slipped into obscurity and is only still practiced by the Tujia people.

Spit on the Bride, Masai, Kenya
Often in Masai culture, young women in the tribe are sent off to marry men in other tribes for a bride-price, ‘splitting of the cows’, or as an act of peace. The bride is dressed up with multicoloured beads and as she leaves to join her new tribe her father blesses her (“Mekinchoo enkai enkerra kumok” or “May God give you many children”). He then spits milk on to her head and breasts. In some tribes, it is also believed that, as she walks away, should the bride look back at her family, she will turn to stone.

Stealing the Groom’s Shoes, India
We’ve all lost our shoes in a drunken stupor at one point or another. But to have them stolen by those you hold most dear? What a betrayal! In this custom (called Joota Chupai in its native tongue), as the groom removes his shoes before entering the temple, members of the bride’s family must attempt to steal them. The role of the groom’s family is that of protector. So all in all they both end up hiding the shoes to foil the other. Cue, epic punch up outside the temple! Should the bride’s family succeed, the groom has to buy back his own shoes for whatever money they ask for. Suggestion: Nip down to the nearest shoe store instead.

Fattening up the bride, Mauritania and other African states
Feeding your bride at the ceremony is a common tradition in many countries – who hasn’t offered their lover a nibble of their pecan pie. However, the tradition called ‘Leblouh’ has a far darker side than simply sharing a slice of cake. In Mauritania, and other parts of Africa, it is believed that the more tubby the bride, the happier the hubby and so girls as young as five are sent off to ‘fattening farms’ to prepare themselves to meet a mate for life. At these ‘farms’ the brides-in-waiting consume up to 4 pounds of millet a day, all washed down with at least 5 gallons of camel milk. But worse still, should a burgeoning bride vomit, she is forced to eat that up as well. A 12-year-old girl is on course for a good husband when she weighs roughly 80kg as it is believed that being obese suggests wealth whereas being thin suggest poverty. This rather hideous practice passed out of existence for several years but has since made a come back with a recent rising of a military junta in the country. However, campaigners are still working relentlessly to shut this old-fashioned practice down.

Broom Jumping, Africa
Simply put, the newly married couple skip over a broom after the ceremony. The broom aspect of the ritual is said to originate from African-American slaves for whom it was illegal to get married – jumping the broom was an unofficial seal of the matrimony. The tradition however has its roots in Africa, where a stick, or bundles of sticks, represented a married couple’s new home together. By jumping over the sticks, or broom, the lovers are entering a new stage of their lives and sweeping away bad luck.

Toilet Boycott, Malaysia
Constipation. It’s not the greatest of ailments to experience, is it? So why would anyone in their right mind want to volunteer to go without a toilet break for seventy-two hours. That’s three entire days without taking a ride on the porcelain bus. The Tidong tribe in Borneo do just that; abscond from defecation and urination in the name of love. Should the couple last for three days and three nights without needing to take a bathroom break (and they’re strictly watched by relatives throughout this time), legend has it that they will have a fruitful marriage and their children won’t die young. Talk about guilt trip for just needing a pee.

Keep your feet on the floor, Ireland
At traditional Irish weddings, when the newly weds are dancing at the end of the wedding ceremony, the bride must keep both her feet on the floor. Folklore has it, that fairies love all pretty things and the prettiest thing of all is a new bride. Should the bride lift one foot off the floor the fairies would whisk her away in a jiffy.

Trampling the wedding guests, Marquesas Islands
If you’re scheduled to go to a wedding on the islands of Marquesas in Polynesia you might want to skip out before the end of the ceremony. After the vows and kiss are exchanged, friends and family of the happy couple lie down in the dirt side-by-side, to create a human-pavement upon which the newly weds walk across to consummate the marriage. Can you say slipped disc?

Gareth May is coeditor and founder of His ‘n’ Hers Handbook – the new lifestyle website for couples, featuring date reviews; features and videos; and the odd pair of edible pants.