The 10 BEST THINGS about Christmas

I love these so damn much 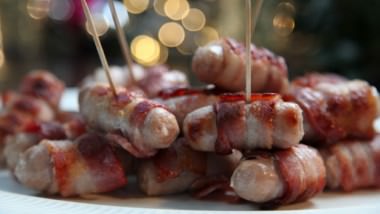 Hey everyone, not long now until we’ll all be stationed around a table with paper hats on watching in horror as the most fossilised member of the family grapples with a brussell sprout like they were trying to balance a football on a toothpick. A fun mental image which leads seamlessly to a list of my other favourite things about Christmas. Feel free to add your own in the comments section. Or just tell me what I’ve missed (for example: hot spicy wine parties, small raisin pies etc)…

The Motown Christmas Album
Girls have been known to punch one another full in the face debating what the greatest Christmas album is. All the cool ones with their hipster skinny jeans and owls on jumpers reckon you should be listening to Phil Spector, while the rest shout things like “The Pogues” or “Slade” or “Band Aid II” at each other as if those things are even albums. They’re not, they’re all just people who did songs. People like Cliff Richard, only marginally less creepy, and definitely not topless in a calendar. Anyway, none of this means anything to me, because Motown Christmas beats all-comers with absolute ease. Just check out little Michael Jackson singing his heart out. Lovely that.

Port
So-named because it was invented in Portugal, Port is the only fortified wine you’ll catch me drinking this Christmas. Yes sir. In fact, in the spirit of full disclosure, it’s the only one you’ll find me drinking EVER. Every single year I make a big song and dance about how I’d forgotten how nice it is. I’ll say something like “note to self, drink more Port”, then laugh hysterically as I have a few more glasses and bump chests with obscure family members. Then I’ll come to on the 28th surrounded by empty bottles, small foil wrappers caked in smack, dope smoke, and I’ll be naked from the socks up. At that point I’ll decide not to drink Port again (for another year).

Christmas Eve
On balance, Christmas Day possibly isn’t the best day of the festive season. Once the mad head-rush of fresh presents has been quelled, you’re left with a room full of family members feeling suddenly empty, a bit hungry and nervous and possibly looking for trouble. Plus someone always wants to go for a boring walk. No way man. No walking. In that sense, it’s all about Christmas Eve, with the swell of anticipation nearing its peak, and people in pubs throwing them back like it’s the end of the world. Great times.

Die Hard
The list of brilliant Christmas movies is long and well-known. The cool kids dig things like Scrooged or The Muppets, the twee kids like It’s A Wonderful Life, the unhappy kids who desperately need to find laughter in the cold will watch Trading Places or Christmas Vacation. Some dick’s just yelled Miracle on Something or Other Street at my brain. Yeah? Well I’m going to watch fucking Die Hard. It’s December, I’ve got a vest on, Bruce Willis is going to tear shit up. It also stars Alan Rickman. Merry Christmas motherfuckers.

Sausages wrapped in bacon
A well stocked Christmas plate has got it all. You’ve got your turkey, the little mob of spuds, a smear of bread sauce done in the large teardrop style popular in MasterChef. You’ve got your veg, a solitary sprout threatening to piss in your mouth, a bit of stuffing, and then the king of the plate – the little sausage guy keeping himself warm in an overcoat fashioned from bacon. And it’s not just him, he’s got a few pals, all in the same garb like a street gang of really small penises made of pork. Don’t be afraid or put off by that, they’re definitely the best thing you’ll have all year. Go on, put one in your mouth. That’s it. Yummy.

Stone Soul Christmas by Binky Griptight
Being that I’m a guy with a beard who’s as pretentious as an Instagram of a Frenchwoman smoking a pipe, my top choice of Christmas single was always going to be something far too hip for words. Hence this. It’s pure funk from a serious soul provider from the Dap Kings. It’s very good. Listen to it.

Grazing/Snoozing
Since the very dawn of time, man has wanted nothing more than to walk slowly around a warm house occasionally poking bits of food with his finger before popping them into his mouth. He might stab at some cheese with a fork, or open up a fridge and place morsels into his mouth seemingly at random. He’ll walk around a bit more, he won’t once look at you, he’ll pour something down his mouth, and then he might just stop and have a sleep for a bit. And then he’ll get back to the eating.

Crimbo Top of the Pops
Like most people navigating the choppy waters of being in their mid-30s onwards, it’s hard to keep up with all this modern music. I know that everyone hates Emili Sande for being too nice, and I know that it’s now fine for women of any age to want to shag a member of One Direction, be it Harry, Steve, Raheem, Gideon or Tobin.  I also know words like “dubstep”. Anyway, ever since I was a little boy in the 1980s with a bubble-perm, a synthesiser and a mankilt, I’ve watched this every year. Who’s going to be Number One? James Arthur? Someone else? Dappy from Fucksticks?

Prezzles
It’s a time for giving and receiving, but mainly receiving. I get so much joy from the look on my own little face when I’ve literally just opened a present that I actually wanted. Granted these rushes of unblemished euphoria are often tempered by then tearing back some wrapping paper to find the equivalent of a messy fancy dress nappy in my hands, but it’s all about peaks and troughs isn’t it? You can’t have Crimbo without the prezzles. That’s a nailed-on fact. So yeah.

Hark the Herald Angel
The best hymn for leaning back and shouting at the top of your lungs. No one knows what it really means.