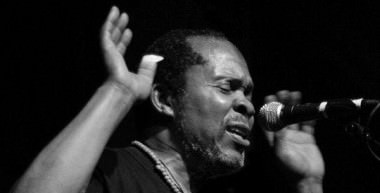 Terry Callier died over the weekend, and it’s always sad when one of your favourite musicians dies. I love Terry Callier for loads of reasons – he had an emotive voice, he made really powerful folk-soul records, his album Timepeace was beardstrokingly brilliant, and it made me look all thoughtful and sophisticated while I was going through the latter stages of university. But the main reason I love Terry Callier is because he was the human embodiment of never giving up on your dreams – proof that if you love your art and have the talent, success might one day come to you. So it goes that he enjoyed brief minor successes in the 1960s and 1970s, then became a computer programmer to make ends meet before being dragged back into the spotlight in the early 1990s by UK DJs who plundered and adored his earlier work. Real success and recognition came to him late, but he spent the last twenty years of his life presumably living the dream. That’s pretty inspirational if you ask me. Here he is doing his thing:

Hey let’s all enjoy some Mitch Hedberg!
The new Seinfeld show about nothing is just lovely