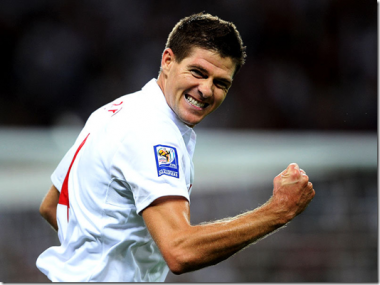 The last time I watched football was in a pub during the World Championships or Euro 96, I’m not sure. So I decided to make a real fist of enjoying Euro 2012. Here’s what I made of England’s first match…

Some thoughts running up to the match

No Beckham, no Rooney, no Rio, no Giggs, no Gascoigne, no Ronaldo. What chance do we have? I barely know any of these guys. The England manager looks like a scarecrow or a spitting image puppet.

We see the French team, we see the English team – there’s Terry, Cole, Gerrard, plus a bunch of others. As they lined up before going out onto the field, there was a track playing that I loved but I don’t know what it’s called – any ideas?

England are in white, France are in blue. This feel appropriate enough. The French look more fashion forward. It’s zero-zero, and the whistle blows.

0 Mins: England start kicking the ball, and off we go. It’s 32 degrees. That’s sunburn weather where I’m from.

7.13 mins: Things got a bit tense down the French end, England literally shouldn’t take their eye off the ball. They could have scored a goal there.

11 mins: France are doing more shooting practice than England. Ashley Cole got tripped up, and the match CONTINUED.

14 mins: Number 16 had a go at scoring a goal but missed. Slow motion gutted scenes.

30 mins: Come back from getting popcorn from the microwave and England score. The audience goes mad, Spitting Image punches the air in the face. It all happened too fast to say which one scored, but who cares? I’m now confident that we’ll win. Prediction: 4-1. Cocks are swinging, finally. Let’s piss all over this!

38.50 mins: Oh shit. A little French dude popped one into the net. A piece of popcorn fell down my top. I’m too upset to find it.

45 mins: Whistle blows. For a while it looked as though France were trying to help England out, then I remembered that they’d swapped sides.  How tres hilarious of me.

48 mins: A tender moment. A French boy tripped up an English boy – he knew he did wrong and gave him a small hug. England are struggling. Je regret Rooney and Beckham not playing.

55.30 mins: Still 1-1, zoning out, trying to count the number of sponsors. Ah hang on, the French Number 7 is an idiot, he pushed over one of our guys!

58.20 mins: Everyone’s bored. A fat French spectator is asleep in the crowds.

60 mins: French Number 7 crashes to the ground tired. What is with the French?

73.40 mins: The French are in possession more than England. England need to have a go with the ball.

76 mins: Jermain Defoe – I’ve heard of that one – swaps with Number 16. Let’s pray this new blood can save the match. Go Team GB! Scott Parker looks posh – I like him. He comes off and Henderson comes on. The commentator remarks that this may not be wise.

78.31 mins: French Number 7 is down having been elbowed in the face. Of course the referee saw that one, being French. This competition should be called “U-Ent-FAIR Euro 2012”!

88 mins: A shot of Rooney’s freakish fake hair. “Stop pulling your hair out in frustration Rooney!” I imagine shouting.

92.28 mins: Sang the French anthem, enjoyed myself. Then the whistle goes. That’s it for now.

About the author: Hannah
View all posts by Hannah →

One Response to Girl writes about football match SHOCKER!