Ah, look at them 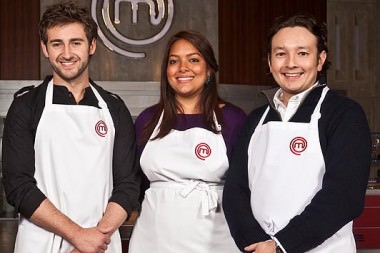 The week’s Masterchef final comes in three parts, like a cake at a wedding, or an overlong play, or wise men visiting baby Jesus, or a love triangle. Tonight, the three finalists will be required to cook some tea for a handful of the finest chefs in the world. People who don’t enjoy banter – it’s no fun for them, it’s no fun for anyone. It’s only fun for Gregg, who gets to prowl around the kitchen licking things off a wooden spoon. Then on Thursday it’ll be back to the simple business of coming up with a starter, main, and ripsnorting pud. After that, the winner shall be crowned. Hopefully it’ll be Shelina. But before that, here’s a quick look at how the final three got on last night.

Andrew – it was a strange one for Andrew. He was sent unaccompanied to a European restaurant to learn from the best – only to spend two days having his face stroked and his nipples massaged through his top by a heavy-breathing sexually threatening head chef. “I was walking a walk up a hill once and I saw some sheeps, Andrew – you know what I did? I made that memory into a lovely lunch”, “Hey Andrew,” he whispered, holding his protégé from behind, “I remember driving home once and noticing some ducks in a pond… I made that memory into a wonderful starter”.   To his credit, Andrew took the bullshit on the chin, and went about making some great barbed wire jelly. Then, when he returned to Masterchef, he cooked like he’d never cooked before. Venison in chocolate, some beautiful fish stuff with veg. He’s peaking at the right time, and has a lovely smile. “I love you,” barked John. “Tell me about it!” shouted a Dutchman from miles away.

Tom – somehow, Tom’s a little bit hard to like. He’s got all the ingredients of a hot modern gentleman – the obligatory beard, a few tatts sliding down from the top of his t-shirt. And then he speaks, and it’s like God spent hours meticulously constructing a sexy cook, but then botched things up by putting a small toy trumpet where a voice box should be. Such a shame. On the plus side, last night he went to the Dorchester and learned how to make halibut on a bed of vegetable tears, and some massive prawn thing with broth. He then fucked everything up by serving John and Gregg an uncooked fish. It’s small mistakes like that which cost people cooking competitions. He’s got a big old mountain to climb.

Shelina – and so to the goddess Shelina. The perfect wife. Like Andrew, she was sent on an overnight train into Europe, where some old guy took her by the hand and taught her how to do things like: fish with toothpicks and prawns, and uncooked mackerel with spatterings of nice salad. She nailed it, as usual. Everyone loves Shelina. When she got back to the studio, she threw together a plate of crabs and some spicy fish thing, one of which made John cry, the other of which had Gregg haphazardly spaffing in his trousers whilst attempting to style it out with a straight face. Shelina to win.