Showbusiness: OMMFG! Christina Hendricks has a phone and some big breasts!

Lady sometimes takes photos of herself 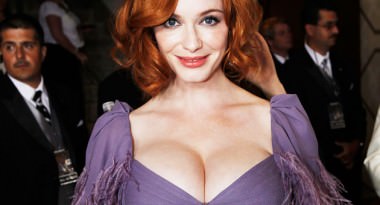 If the history of flirting from afar could be represented in a flowchart it would look something like: love letters sent by pigeon, then by train, then by bus, then by air, then long distance phone calls involving panting and fervent crotch play, then saucy answer phone messages, then emails, then dirty texts, and now it’s all about taking steamy pictures of your large penis if you’re a guy or your amazing breasts if you’re a girl and sending them to your lover. A private reminder of what’s waiting for them when they get home. Heaven forbid these horny pictures of nips, pubes, and bumholes ever fall into the wrong hands. Which leads seamlessly to the news that had showbusiness desks all over the planet awash with waves of cappuccino foam spurted from the mouths of shocked and elated journalists – Christina Hendricks, the bouncy redhead from Mad Men, has been dabbling in this electronic horseplay, and now it’s come back to take a bite on her magnificent behind. Her mobile phone was stolen, and now all sorts of “come hither” snaps of her pouting into a mirror wearing sod all have surfaced. On the downside, the one of juicy naked boobs has reportedly been added to the pile in the manner of a hilarious bikini babe slide in the middle of a boring presentation about town planning. Ooh, how did that get in there? They’re not Christina’s apparently.

In other important news, Stacy Solomon – the former X Factor contestant who sings like an angel and speaks like she might be a little bit brain damaged – has been told off by the entire country for sneaking in a lovely cigarette while heavy with child. And Ice T’s wife Coco (below) caused an almighty showbiz explosion when she popped down to the beach in one of those bikinis that disappear up your bottom. 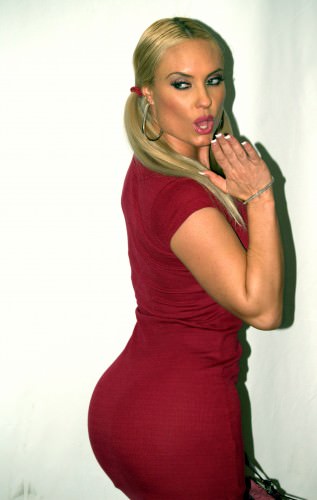