Including two of these ladies… 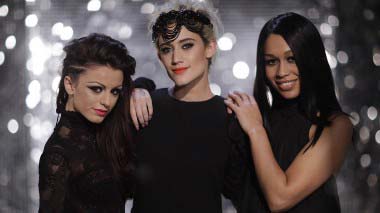 Of course, Interestment has been rather busy elsewhere for the last few months, which is terrible. If you are looking for stuff to read, you can find a high ranking member of the Interestment family writing things about celebrity and TV here, or about football here.

In the meantime, here’s our take on the latest Sunday night edition of X Factor!

The stage was transformed into heaven for Alexandra Burke who doffed a cap to the Virgin Mary with her styling, before going all Jesus on your ass by slowly ascending to the roof of the X Factor studio. As is appropriate when faced with the messiah, three judges gave her a standing ovation, whilst Cowell fell to his knees, ripped open his shirt, and shouted for forgiveness.

Next came Glee Club to turn Cheryl and Dannii’s beautiful cheerleading Prom Queen stomachs with their optimistic pop songs sung by losers. Louis absolutely loved it, others wondered why the actor who can walk in real life was still pretending to need a wheelchair. Was this art bleeding into life? Were they in character?

Hang on, if we’ve figured this out correctly, is Alexandra Burke Jesus now?

Such potent thoughts were soon put to bed by the arrival of the Black Eyed Peas, who pulled out a futuristic reimagining of two magnificent 1980s classics, by doing sci-fi Dirty Dancing as performed by Three Men and a Prostitute.  It was heavy.

And lo, to the results, which would find one person leaving, and four acts moving forward to a grand final. “Didn’t a final used to involve two acts?” whispered our inner child, before getting told to shut the fuck up by our inner grown up.

All the favourites made it through, leaving Cher and Mary standing lonely on the stage like creepy funny mirror reflections of Cheryl Cole and Dawn French.

Mary shouted, Cher wept, then Dannii screwed the whole thing up for Mary by sending Cher through to the final.

Mary needn’t be too downhearted about this – somewhere someone is putting together the final touches to a Chicago poster which features her head superimposed onto some gorgeous tart in suspenders. She’ll be just fine.

Cher will perform with the legendary UK rap troupe N-Dubz, as all four flash gang signs at the camera, hold kitchen knives in the air, then reach a thrilling finale by symbolically pouring cider all over the studio floor.

There won’t be a dry eye in the house.

One Direction will start as usual, with the boring one taking the first couple of lines, then handing it over to the hot one with the Diana cut. After that, it’ll all be up for grabs, and if the silent Irish one ever wants to take this opportunity to blow minds with some serious Mariah Carey vocal runs, then this is his moment.

Matt will be joined on stage by the ghost of Minnie Riperton to see which one can reach the most preposterously high notes, leaving disgruntled grannies all over the country banging their TV sets, wondering what’s happened to the sound, whilst just behind them in the kitchen, the dog is dancing with the cat.

And speaking of cats, Rebecca will sing like a soulful Siamese one, and not win the thing.

Even though she totally should!

Football drama – it’s an international special!
Get excited everyone! It’s a TRON game!

One Response to The X Factor semi final – Finalists Announced!