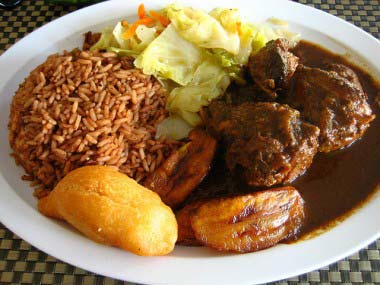 As expected, everyone was pretty discombobulated yesterday, what with the clocks changing and everything. Confused old women were turning up at church just as everyone was leaving, no one really knew when to eat lunch. Some people even went to work. But, for all that was spectacularly confusing about time shifting forward by an hour, it also signals the imminent arrival of summer, which means that even the smallest segments of roadside greenery will be awash with groups of young lovers wearing linen trousers, snogging each other in between mouthfuls of scotch egg and glasses of sweet wine. And, best of all, you can throw your winter cook book right out of the window and onto the street below, because you won’t be needing that old thing for at least three months!

To celebrate, we’ve thrown open the Interestment Cook Book, and have plucked out brilliant recipes that might yet suit the weather, and where better to start than with the cuisine of the Caribbean? Here’s a recipe for Brown Stew Chicken that even your cat would totally understand.

6. A little bit of ginger

10. One tablespoon of Chicken Seasoning

13. A couple of lugs of yummy vegetable oil

Now, grab about six chicken thighs – WASH them in lime juice (using just one lime), then smear in the marinade. Put in all in the fridge over night…

Then! They next day, just scrape all the marinade off the chooks (but keep it), fry the thighs for a bit, until they’re nice and golden. Put them in a big pot, add the leftover marinade stuff, then pour in enough water to cover the top of the chicken. Splat a couple of very important tablespoons of TOMATO KETCHUP into the mixture, put a lid on your pot, simmer for about half an hour, then BOSH. Brown Stew Chicken. Done.