As won’t-be-seen on Family Guy… 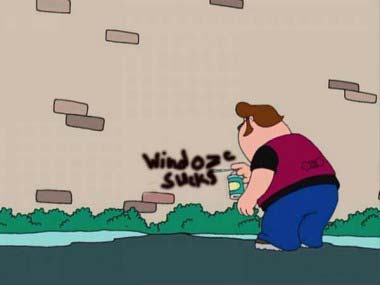 The problem with writing about technology is that the big stories are often really really boring. Saturating the inter-pipes this week were mutterings of Microsoft’s launch of their new operating system, Windows 7. This is kind of a big deal, seeing as it’ll be the thing millions of people all around the world depressingly stare at for their entire lives, but it’s still really boring. To make matters worse, many have already had Windows 7 installed on their PCs for months, because Microsoft put it up on the internet for free for the masses to test.

Of more interest are the ideas that Microsoft have quietly, but insanely, initiated in an attempt to combat the painfully dull nature of an operating system launch. These things are like fleeting glimpses of the deranged, cackling voices, which apparently permeate the halls of one of the most powerful and lucrative businesses in the world.

The first is the Windows 7 Party (above). In what is one of the most awkward six minutes ever experienced by a human, we are shown via an instructional video how best to prepare for a party at which “Windows 7 is an honoured guest.” Our hosts include a woman, an old woman, a cheerful black guy, and a nerd – all of whom uncomfortably shimmy amongst one another, make very little sense and have clearly never met. The idea behind the video is that a significant number of us will host such a party in order to share our collective excitement, and discuss the feature set of a new Windows release. The fact that there is no way this will ever under any circumstance happen in real life is perhaps the point.  Regardless, it’s a surreal and distressing piece of promotion conceived by a lunatic.

The second is an episode of Family Guy, sponsored by, and seemingly containing numerous references to, Windows 7. This hasn’t aired yet, but news has just come in that – after watching a preview of the episode – Microsoft has decided to drop its name from the whole thing. Apparently the show contained content which the company was unhappy to associate with, including jokes about deaf people, the holocaust, feminine hygiene and incest. This really does beg the question has anyone at Microsoft ever seen an episode of Family Guy?

Finally, and probably the most important story of the week, Burger King in Japan has hosted the Frankenstein-like creation that is the Windows 7 Whopper. This amazing slab of food is essentially a normal Whopper but with seven burger patties inside it.  Keeping with the 7 theme, it costs ¥777 (£5.20) for the first 30 people to arrive in a Burger King.  It also looks like it’d probably kill you as you attempted to wrap your greasy fingers around its wildly impractical form.

I kind of want one.