Are we going to end up getting LOST? 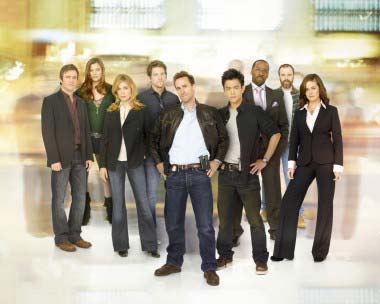 Considering how rabidly agitated some people get about the ‘dumbing down of TV shows these days’ – and other such wearisome outragisms – we seem to love  confusing telly.  Just lately, a glut of US-engendered serials has descended, created by scriptwriters who have apparently dispensed with the boring old beginning, middle and end concept, in favour of a spinny wheel technique, littered with madcap scenarios. The wheel gets spun and wherever the needle stops, that’s the plot for this week’s episode. Problem is, things start off thrillingly original and exciting, but eventually droop into disappointing, far-fetched lunacy, as writers clearly lose track of where they were going with it all and probably start dropping acid for inspiration.

First came the appropriately named Lost. It started brilliantly – aircrash survivors in an addictively curious mystery, which had everyone debating time travel versus Purgatory. But then it all went zany mental, introducing weirdos in bunkers, monsters, people with beards to represent insanity, a hobbit with a drug problem… and we got the feeling that clueless scriptwriters were ploughing blindly onwards, hoping that no-one would notice. A bit like a virgin in a brothel. NB. We have noticed. We’ve stopped watching.

Next up: Heroes – a classic baddies vs. goodies superhero romp in a world were genetic mutation meant that normal people had special powers (with genocidal issues thrown in). Cool!  The downside?  Countless story strands and characters rendering the show utterly baffling.  Not to mention the depressing fantasy-killer that cheerleaders could be thrown off buildings and survive. Gutted.

And now we have FlashForward.  Everyone in the world blacks out for 137 seconds and experiences a glimpse of the future.  A constipated-looking Joseph Fiennes is the FBI agent in charge of collating everyone’s visions, hoping to piece together  what the fizzle happened. So far, so followable. But it has all the warning signs of going a bit ‘wha-?’ – Kabbalah has already had a mention, as have mystic number references, there’s the multiple story strand chestnut, loads of dead crows, and a mysterious kangaroo.

Thus far, my money as to the big reveal is either on:

1. A very, very undercover Government organisation intent on world domination has implanted false futures into people’s brains with a big machine to manipulate society.  People think the future is set and then realise it isn’t when they start changing things. The Government fails.

Epic Conclusion: The Future is Not Set

2. Aforementioned, power-crazed  Government organisation has created a time-machine to manipulate society.  But rather than just moving the experimental volunteers forwards, it has affected global consciousness. The Government fails.

Epic Conclusion: All Human Beings are One

3. Aliens are doing it. The Government have known for years.

But then again, I may give up caring by Season 2.