8 Reasons to bring back Arrested Development

It could have been the best ever… 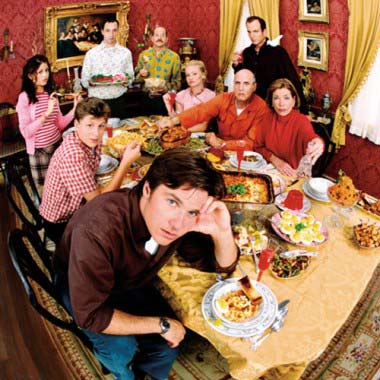 It wasn’t so long ago that we voted Arrested Development our second favourite US sitcom of all time – that basically makes it the second best anywhere, ever. Americans tend to do these things better, and for one simple reason. While great UK sitcoms – The Office, Peep Show, Fawlty Towers – tend to focus on the idiots, over in America, the centre of the show tends to be the calmest head, while the real idiots are those around him/her. It’s a simple device, but one that gives their shows longevity. Or, at least, it should. Jerry Seinfeld managed to be the calm centre in the middle of a comedy storm for nine seasons. Larry David has maintained his arched eyebrow on social convention for seven and counting. The wonderful Larry Sanders Show churned out six seasons. Friends was granted an amazing ten outings. And yet, Arrested Development – a show very much at ease amongst such big hitters – was given two and a half, then axed. Ridiculously axed. Yes, the big news is that a movie version shall be coming out soon. But it’s just not enough. Here are eight good reasons to get the show back on the air…

It’s rare for an actor to star in two great sitcoms, especially on a regular basis. David Schwimmer has come close with a decent turn in Curb Your Enthusiasm after Friends, but he was playing “himself” in the latter, and only for a short while. Tambor, meanwhile, produced one of the finest television comedy turns in The Larry Sanders Show – playing put-upon, bittersweet sidekick Hank Kingsley (above) – before heading up the Bluth family from behind bars as George Snr. To waste such a fine comic talent is a crime. Almost an actual crime. Bit parts in the Hell Boy franchise come nowhere close to appeasing the situation.

David Cross’ Tobias missed out in our Top Four Sitcom Characters, and that may have been something of an oversight. We plumped for GOB instead at Number 4. George Costanza won the whole thing, but mainly on the basis of having steadily improved over the course of nine seasons. Had we taken the George from the first three seasons of Seinfeld, it could have been a totally different story. Annoyingly, Arrested Development came to an abrupt halt just as Tobias was really coming into his own. Were we robbed of possibly the greatest character in the history of little screen comedy? We like to think so, yes.

There’s no shortage of iconic dance moves/bad impressions in TV shows – just look at David Brent‘s charity shuffle in The Office, Basil Fawlty‘s Nazi impression in Fawlty Towers, and Elaine‘s weird kicking dance in Seinfeld. But, trumping all of those, is the Bluth family’s total inability to correctly impersonate a simple chicken. This could have been the guaranteed physical catchphrase for years to come, and, honestly, we’d never tire of it. Hopefully.

Sitcom couples are not supposed to tread a simple path. Ross and Rachel spent years learning to understand their feelings in Friends. Peep Show is a sitcom built on two bumbling morons attempting to decipher their own loins. But, for confusing, misunderstood urges, you can’t beat the forbidden yearnings of George Michael, as he struggles to come to terms with the fact that he wants to get off with his own cousin. Brilliantly acted it was too.

It can be a bit of a push, making a comedy show both sexy and funny. The Larry Sanders Show and Extras have both managed to attract sexy Hollywood types, but using the premise that they get to lampoon themselves. It’s more of an ego trip, and it’s a much rarer Hollywood gem that will step into character on one of these shows. Friends, in the latter years, was a good place to be seen. But it was the unfashionable Arrested Development that snagged a beautiful Oscar winner, Charlize Theron. She played a spy with an appalling English accent. Good for her. Very pretty, that Charlize Theron.

6. The Bluths – Greatest ever sitcom family?

It’s impossible to think of a greater sitcom family than the Bluths. Certainly not that family in My Family – they’re a hideous lot. The Costanzas in Seinfeld stand out, but it’s all rather shouty-shouty, like they only have one trick. The Cosbys were also very good, but a little too wholesome. The Bluths were far more diverse, and, in many ways, very similar in type to classic soap opera families, like the Carringtons in Dynasty. The cruel mother, the dying king (or, in this case, incarcerated), the greedy brother (GOB), the needy sister (Lindsay), the weakling (Buster), and the calm head, the natural heir (Michael). In some ways, it was all rather brilliantly Shakespearian.

Man, we loved The Fonz. We especially liked it when he did that two-thumbs-up thing and went “ehhhh” – or whatever it was. It was never going to be easy to trump that as an actor. Yet, trump it Henry Winkler did, when he decided to take the role of Barry Zuckerkorn on Arrested Development, playing rather against type as an attorney with a few diverse sexual secrets. Plus no leather jacket. A star was reborn.

We’re enormous Seinfeld fans, so much so that we voted it our favourite US sitcom ever, but fans of the show will be well aware that it wasn’t until the fourth season that it really started to cause a big ripple. A big ripple that eventually exploded into a massive tsunami. If we were forced to choose between watching the first three Seinfeld outings or the entire Arrested Development output back to back, we’d plump for the latter. That really says it all.

What the papers been sayin’?
Interestment’s Top Ten Funk Tracks