What’s in the news? This is! 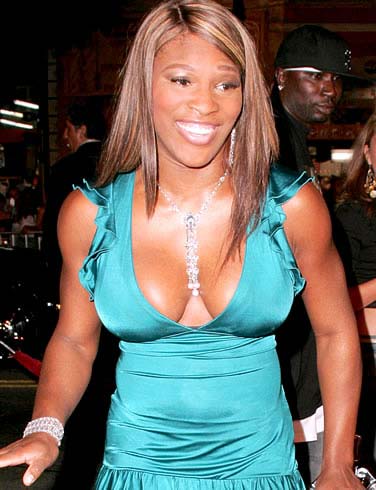 First, X factor news! At the Pride of Britain Awards, Louis Walsh announced that he has already given up on producing the winning act this year.  Clearly still unsatisfied with the stifling amount of tact in the room, he proceeded to defend his unpopular championing of the Grimes Brothers  by quipping, “being a popstar isn’t all about being a good singer. Look at Kylie!” Ahem. Moving on…

Bomb headlines!: Safety watchdogs, bored of laughing at CCTV of enraged holiday makers removing their shoes and crawling through tunnels at airport check-in, may introduce full body security X rays.  This is due to the rising number of body bombers who insert explosives into their cavities to escape detection (although surely the way they walk might give it away). “While not wanting to be alarmist, I admit this [new trend] is alarming,” said Richard Barrett, the head of UN’s Taliban monitoring group – without irony.

In celebworld:  Tennis hunk Serena Williams (pictured) said that she doesn’t like her body, shortly before getting totally naked on the cover of ESPN (European Sports People Naked) magazine, Elizabeth Taylor subtly announced her heart op on Twitter, and Girls Aloud clone Nicola Roberts spoke out on her growing confidence as a member of Britain’s shiniest pop hydra: “I don’t feel like the ugly one any more,” she said. Before looking at photographs of the other four and silently rethinking what she’d just said.

Entertainment just in: The BBC is tightening up on swearing;  pre and post watershed.  It’s understood that the rules will target the “three strongest swearwords in the English language”.  Meaning no place for the c-word, the f-word, and the one about effing people’s mothers. We think. Plus, possibly the one which combines the s-word and the c-word to create a super-swearword that sounds a bit like chipmunk.

And finally: Drug-driving is on the increase and Welsh police will be the first to use road-side drugalyzers to catch high motorists.  However, as the devices are not yet government approved, drivers are not obliged to submit to testing and if found to be high, police cannot prosecute. However it is illegal for a policeman to allow someone under the influence to get back in their car. To save on time wasting, the North Wales constabulary have cut out the middle-man and simply started arresting themselves.