We LOVE Masterchef: The Professionals 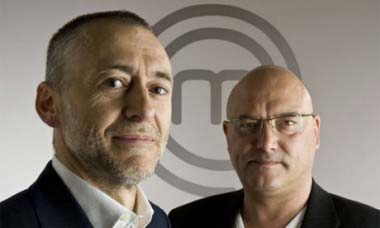 Spin off shows don’t have a great strike rate. Dynasty II: The Colbys was preposterous, Popstars: The Rivals featured Geri Halliwell attempting to judge a singing competition, and late night versions of Hollyoaks tend to justify their post-watershed slot with a nipple-flash and OB saying the c-word. Apart from that, the plots are the same. But, as with any rule, there is an exception, and that exception is Masterchef: The Professionals.

The premise is almost exactly the same as normal Masterchef, in that it features lots of overweight people with stress-induced cold sores making Gregg Wallace a spot of lunch. Only these guys supposedly know what they’re doing, and standing beside Gregg isn’t John Torode, but Michel Roux Jr – a celebrated Michelin starred chef, who they show at work at the beginning of each episode polishing a shot glass and putting it on a plate, just to prove how wonderful at cookery he is. They could, we think, have come up with a rather more thrilling example of his culinary prowess. But, nitpicking aside, this is wonderful television, mainly because Roux Jr seems to be thought of in Jesus-terms by these young go-getting chefs – all of whom want a piece of that Michelin action in “five years time”.

As ever, Gregg absolutely loves his pudding – the general consensus seems to be that if you want Gregg in your pocket, just do him a jam roly-poly. But it’s Roux Jr who is the real star of the show. His looming, eerie presence is felt in the first stage, when the chefs have to prove that they’re worthy of cooking him dinner. He’s not even in the room, yet their hands start with a faint tremor, and after ten minutes of gutting a fish, or peeling a potato, their faces become startled and sheened in sweat, while the tremors have morphed into all over body shakes and jelly legs. He’s a scary entity, that Michel. Although, actually, he isn’t. Were this a Gordon Ramsey vehicle, there would be disturbing images of young cooks attempting to douse a tirade of effing and jeffing whilst roasting a duck. If Marco Pierre White were there, you’d see at least one trembling hand clumsily missing a cucumber and severing a vein. But Roux Jr is instantly kind to the chefs, he dares to compliment their food, and even when it’s bad he explains why, rather than giving them a faceful of plate pie. There is genuine glee in their moistening eyes when he compliments them.

This is touching stuff. He’s our new favourite chef, and we want the French/Welsh bloke called Ludo to win.

6 Responses to We LOVE Masterchef: The Professionals