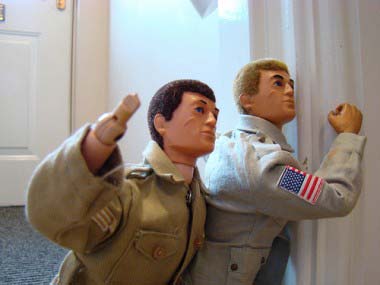 As its Friday, let’s go crazy and kick off with Fashion News! Distressed, aged, bleached, battered and splattered with holes: nope, not Madonna on a Thursday, but jeans at Balmain, apparently one of the most eagerly anticipated and imaginatively priced catwalk shows of Paris Fashion Week. For a mere wallet-violating £1000 earth pounds, you too can have a pair.  Or you could just save yourself a grand and not bother.

Consumer headlines: After being AWOL for three years, Action Man is BACK (pictured)! The 10-inch, gun-toting, war-mongering, plastic underpant-wearing children’s toy will be on sale in Tescos. “It will be a sell out!” says someone from Tescos (probably). The £15 version comes with Gulf War Syndrome, and a severed ear.

Health and Beauty Update: 450,000 road accidents per year are caused by women applying makeup at the wheel of their car, says some Insurance group, gleefully rubbing their hands together and offering free Lancome mascaras with every motor policy taken out this month. ROSPA spokesperson highlights the idiocy of the general public by feeling the need to suggest applying “make-up before or after driving.” And research has shown that a shocking 1 in 5 UK mums-to-be smoke.  Proving that pregnancy is incredibly stressful.

Sex news: Women rejoice! The publication of a new book called Why Women Have Sex means you can now find out.  For many women, it seems having sex comes down to pleasure. Surely a Nobel prize is on the horizon? Perhaps after they bring out the sequel: “Why glass things break when you drop them.”

In Careers: A survey carried out on kids aged 5-11 regarding their career aspirations was labelled unrealistic by joyless experts. Apparently, these pre-pubescent idiots want to be astronauts, pop and sport stars!  Not a single 5-11 year-old aspired to the dizzy heights of unemployed financier, striking postal worker or drug-addled, single parent. Yet.

Otherworldly Report: A U.S. Psychic claiming to have been beaten up by rival psychics may have been fibbing about the attack say police.  They have also started arresting people who respond: “wouldn’t she have seen it coming?”

And finally in Food news: A woman in Texas ate some goldfish to annoy her husband, and be-sequinned, Strictly Come Dancing quarry, Natalie Cassidy was papped in M&S buying convenience food. Triple cringe!