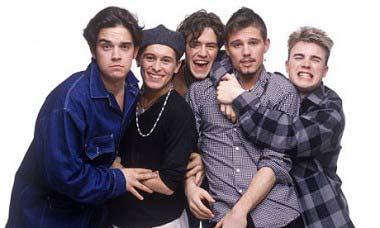 Nothing karate chops your underpants more than watching a good friend transform into a superstar. One minute, they’re sitting in a pub with you, laughing at your joke about a rabbit going into a butcher’s shop, the next minute, you’re shouting the same joke at them from behind a red rope which divides “people” from “very important people”. They’re french kissing three girls at a time, you’re in tears clutching a bottle of Becks that you found on a table. They don’t know you anymore. Damn it, you don’t know you any more. You’re going to need some fresh jokes.

All of which leads us very conveniently to Robbie Williams, who has been scattering clues all over the place to suggest that he might be rejoining his old band, Take That. The same Take That who stood behind the velvet rope watching Williams romping his way through a cordoned-off, much fancier section of the club, for years. Metaphorically speaking. But now, of course, they’ve been allowed access to the VIP bit, whilst Robbie’s probably straddling the rope, career-wise. Will he make it back into the fancier areas of the club? Will they stop fondling fake bosoms and even notice him now? Is this metaphor really tiring yet? It quite probably is. The point being that Williams is hedging his bets. He’s got a solo album coming out, which might bomb now that his ex-colleagues have been granted a second blast in the sunshine, so it looks like a good back-up plan to sew rumour seeds of a possible full reunion. It will be interesting to see if he bothers re-entering the fold should his next outing succeed. Either way, showbiz desks around the land have become dizzy with glee over this. Absolutely dizzy.

In other news, Alesha Dixon is still souring everyone’s milkshakes with her clueless, meandering assessments on Strictly… And Lacey Turner from Eastenders won a prize at an award’s show, and has left the entire celebrity world agog by not looking too cheerful about it. What is her PROBLEM? 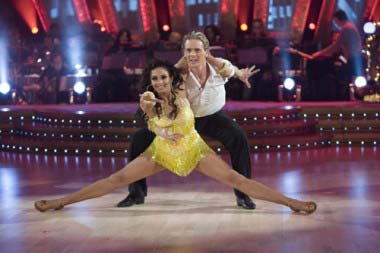