Interestment Television: Get Up Stand Up!

It was quite a night… 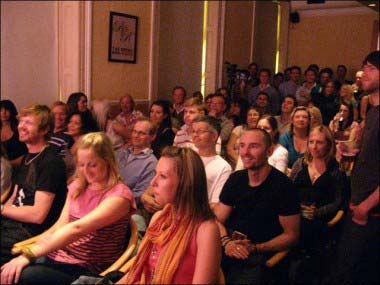 Last Friday, the first of the Interestment comedy nights took place at The Bread and Roses pub in Clapham – a rather lovely area of South London. Once you’ve positioned yourself as far away from the High Street as possible. And it went magnificently well, with all the worrying night terrors about nobody turning up evaporating within seconds, as young great looking people flooded through the doors for the start of the show, many of them having to huddle together like VERY HAPPY sardines in the upstairs room. Meanwhile, downstairs, old Interestment DJs Josh and Hip Hop Sam were blowing the fluff off needles for the first time in many many moons, and a fantastic time was had by all.

Comments after the show included: “great”, “very magnificent”, and someone even said “awesome” – a horrendous word, but well meant. Have a look at the highlights in the below clip, and see pictures from the night here.

The next one will be taking place on October 2nd. GET YOUR TICKETS NOW!

2 Responses to Interestment Television: Get Up Stand Up!