Will you be bringing a date tonight, sir? 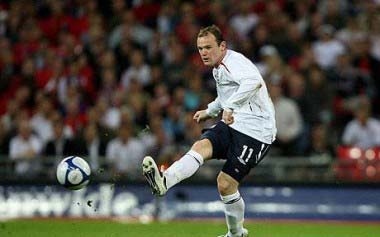 It’s never anything less than a pleasure and a joy to hear from a member of the ever-growing Interestment family, and today it’s the turn of Steve – a funny man with football on his mind. He had this to say about tonight’s matches and more…

England play football tonight and the question on everyone’s lips is “who will play up front with granny’s favourite footballer, Wayne Rooney? Big lad Heskey or pocket rocket Defoe?” Fabio has already flipped a coin, had a game of paper, scissors, stone with himself and played eenie, meenie, miney, mo with his bare toes before sitting down and making an actual decision, but he’s not letting on…..or is he?

“I think it’s not important to be tall or small, it’s important the movement you do,” coughed the Italian, his eyes shifting around from side to side.

It seems he’s had us all fooled, but the proof is right there – he’s going for the greatest mover of them all, the Robot Master Peter Crouch! The Croatians will be no match for the lanky tit from Spurs, who is such a good mover that he even danced the lovely Abbey Clancy into bed. In fact she’s still so impressed by his gormless bodypopping that she’s agreed to marry the lurching beanpole! Forget scoring goals, that is true power.

Over in Argentina, Carlo Tevez’s mother, Diego Maradona, is facing the chop as his side slumped 3-1 to arch enemies Brazil. The team in gold even rubbed salt into the gaping wound by letting the wonderfully big boned Adriano onto the pitch, presumably to wander around panting and looking for scraps of food. He went hungry, bless him, as he couldn’t physically bend down for fear of his impressive gut exploding.

Things got personal in France as the beautiful Thierry Henry attacked his manager’s hair:

“… there is no style, no guidance and no identity.”

He had threatened to enlist the help of Gillette buddies Roger Federer and Tiger Woods to help shave his head but both declined, saying they liked the Donald Sutherland look. As do we.

And finally, George Burley bit back at all his critics by revealing his masterplan for International football:

“I haven’t got a clue and I’m not really worried.”

The Braveheart spirit lives on.