Reasons to be cheerful about Oasis splitting up… 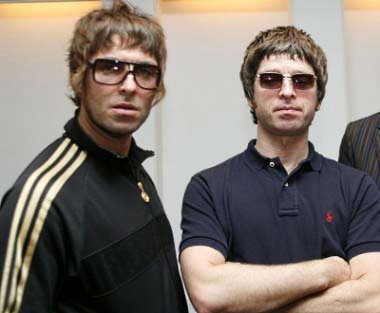 Whether we have been victims of some kind of taste bypass, we’re not sure, but here in the magnificent Interestment offices, Oasis have never quite dunked our onions. They’re all just a bit whiney and dull for our tastes, the music equivalent of being stuck down a well with a nervous statistician. And yet, we are fully aware that much of the country has a massive man-crush on these shaved gorillas with their nonsense music, that’s why whenever they play at Knebworth or Wembley, entire towns in middle England drain for the day, and tickets exchange hands for crazy prices. So, to help everyone through the inevitable grieving process, we thought we’d make a small list of reasons to be really happy…

1. We won’t have to endure any more songs in which the word “shine” is mispronounced “sheee-yine”.

2. As the spotlight fades, we will be spared the horrendous pap shots of Liam Gallagher striding around Waitrose, yet still attempting to look edgy.

3. Their album names have always resembled the results of a sixth-form students think tank – Definitely, Maybe, Standing on the Shoulders of Giants, Dig Out Your Soul, the abominable Heathen Chemistry. It was only a matter of time before they named an LP Vibegeist. No one needs that.

4. These men were getting old, threatening to morph into the next Rolling Stones, and frankly, there’s only room on the circuit for one decrepit mob of ex-druggies gingerly strumming their old hits.

5. A generation of youngsters will be spared the temptation to waddle around school like Charlie Chaplin with a nasal Manchester accent, going “our kid” this and “mad for it” that as an homage.

6. Noel can now go away and for a supergroup with Bono, Chris Martin, and The Edge. We can then ignore them until they get the message.

2 Responses to Reasons to be cheerful about Oasis splitting up…