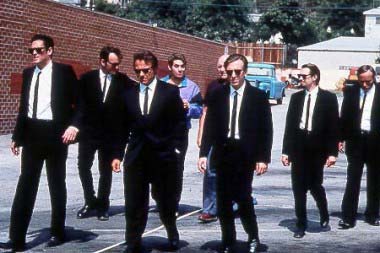 Critics seem to have a strange relationship with Quentin Tarantino, and his latest film, Inglorious Basterds, already looks to have split opinions right down the middle. But here in the gigantic Interestment offices which overlook a lake, we love him. He literally hasn’t made a bad film, nor has he fallen into the trap of making the same kind of movie over and over again. Jackie Brown received lukewarm reviews for not being anything like Pulp Fiction, Kill Bill hardly set anyone’s trousers alight – except ours. And Death Proof was entirely panned, but, honestly, it’s an excellent film, as any fan of old exploitation/slasher movies will attest to. He’s a master of any genre he deems worthy of a toe-dip, so with that in mind, we spent hours sifting through footage to find the four scenes that wholly befit our devotion. It was a tough process…

No doubt about it, Pulp Fiction is his masterpiece, so coming up with a single scene was emotional. The Christopher Walken “watch” monologue very nearly made the cut, as did the opening diner scene, the drugs overdose, and Harvey Keitel as The Wolf. But in the end, we simply had to go with Samuel L Jackson’s finest cinematic hour, as two heavies set about scaring the hell out of some very nerdy criminals eating a fast food breakfast. WARNING: contains scripture.

A fantastic martial arts epic, Kill Bill was another with plenty of scenes to choose from, pretty much all of them extremely violent. The final fight with Bill himself – who recently died in a weird penis-related incident – just missed out, as we went for her blood-soaked frenzy against the Crazy 88 instead. It’s almost impossible to watch without whooping.

For those yet to see it, watch Death Proof. It’s all there – a slow build up of tension, sudden gory deaths, a magnificent car chase, Kurt Russell putting in one of his all-time great performances – which is saying a lot for the man who was in The Thing and Escape from New York. Plus this, the wonderfully hip, yet slightly creepy lapdance scene, followed by exactly what-happened-next.

Tarantino is the master of the title sequence, and it was a seriously close call coming up with our favourite. Reservoir Dogs‘ slow-walk-brick-wall intro was literally pipped at the last second by the airport arrival in Jackie Brown. And for one reason only – Bobby Womack. Great song, supercool opening, the legendary Pam Grier. The film promises much, and delivers!