Flintoff fit for his finale!

The cavalry has arrived, they say… 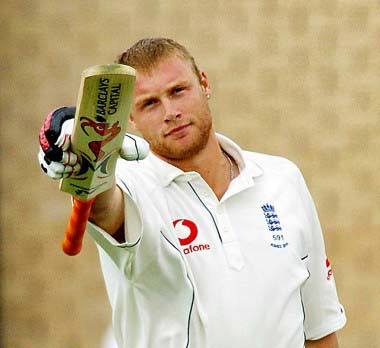 As always, it’s great to hear from a member of the Interestment family, and today we’ve heard from a few of them. In this case it’s Josh Allen, here to tell us all about the next important cricket match. He had this to say…

If ever there was a time for good news in English cricket that time is now. Fortunately for captain Strauss and co that good news hath arrived. For it shall be cometh the man, cometh the hour, as Freddie Flintoff was cleared to make his last ever Test appearance in next week’s Ashes showdown.

The official assessment from the suits at the ECB is that Flintoff’s place is subject to “further rest and intensive treatment” but the all-rounder is expected to play and after revelations that he missed the Headingley test against his will, any u-turn would surely lead to widespread rioting throughout the nation’s cricketing community.

The news comes as an almighty boost to Strauss, who saw his side surrender their 1-0 lead with a dismal fourth Test showing. Indeed the batting was so poor that the 39 year old Mark Ramprakash has been strongly linked with a recall despite a Test average of just 27.32. Just as well then, that a ten day gap splits the two Tests – a sudden bout of panic is understandable, yet to follow through with a foolishly romantic notion when given time to consider, is anything but.

In actual fact major changes appear unlikely and could cause more harm than good. The ever likeable Phil Tufnell sums the situation up nicely:

“I would say no to wholesale changes,” said the former England spinner.

“We’re one Test away from winning the Ashes. The boys have got us this far – okay, we’ve had a bad match, but crikey, we’re playing against Australia, one of the best sides in the world. It’s still 1-1.”

That may mean one final chance for Ian Bell and Ravi Bopara but while that news is likely to trigger more groans than cheers amongst the England faithful, both have at least been sent away for more practice.

In a really rather clever move, the stuttering duo have been placed amongst a quintet of players (the others are Alastair Cook, Graham Onions and Graeme Swann) to be sent back to their respective counties for an extra match prior to The Oval decider. Should they impress, some confidence will be restored, should they fail, the selectors will enjoy a somewhat easier task.

The Oval epic, featuring a Freddie swansong, gets underway on Thursday 20th August but make sure you check out the Fifth Test odds now so you can make an informed Oval Test bet.