Featuring literally none of these… 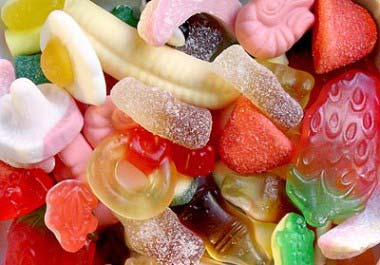 Like so many things in life, sweeties have felt the full impact of Health and Safety regulations. Time was when an entire street could head off to the local park, leaving their front doors wide open, to mingle with the neighbours, exchanging gobstoppers mouth-to-mouth with no worries about catching strange undiagnosed diseases from thick, fisherman’s saliva. Children would happily work their way through bags of one penny chews with bits of asbestos in them. And there was nothing wrong with snatching a wine gum from a cat’s mouth and finishing it off yourself. Great days. Unfortunately, then Tony Blair came along, and everything changed. If we had our way, we’d still be wasting entire weekends dissolving our teeth on these four luxury treats… 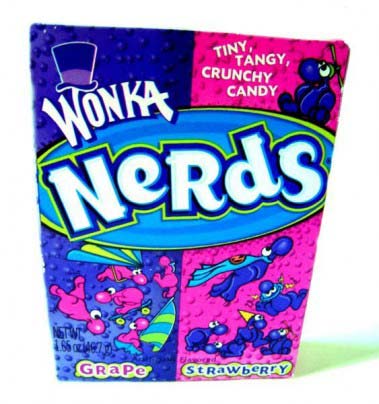 For so long the word Nerd was used in a derogatory fashion to describe sensitive young people who liked playing computer games, and rarely found a comprehensive route into a lady’s affections. These people might also be termed dweebs, dweeboids, robo-dweebs, four eyes, glasses face, stupid nerd face, bad hair head, egg head, silly trousers, brainy twat, way too brainy, gross bod nice brain, or Einstein but less sexy. And then, in a flash of genius, sweets manufacturers reclaimed Nerds for themselves in 1983, and a mesmerising candy sweet was born. Sold in little boxes featuring two delicious flavours, few pleasures came close to shoveling a fistful of the things betwixt your glistening cherry lips. The greatest of the flavours was grape, which, somewhat ironically, is a relatively rubbish fruit. 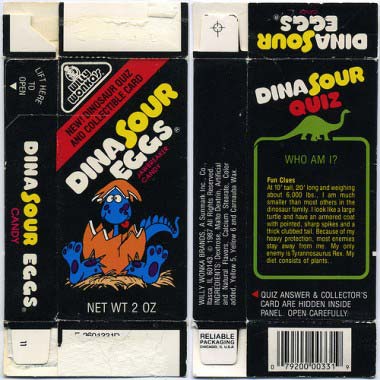 Alongside frozen Highland Toffees with razor blades in them, these were the ultimate sweetie/weapon of choice in the early 1980s, and were often used as an initiation tool if you wanted to join a local street gang. For anyone remotely interested, to get into the Bainton Road Lad’s Brigade back in 1985, you could do a lot worse than bite into a Dinasour Egg in record time. Roughly the same consistency as a battered old snooker ball, they were sour beyond belief, making it a double thrill if you happened to have a weeping mouth ulcer on time of eating. Sadly, with their tooth-breaking nature, and quite breathtaking effect when used in a David and Goliath slingshot, it wasn’t long before they started going extinct from confectionery shelves. 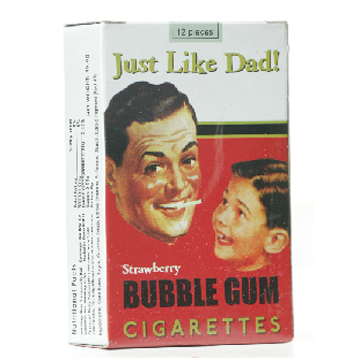 Of course, these days absolutely everyone appears to be anti-smoking to the point where grown men are banished from public houses like dogs – great big smoking dogs – to enjoy a smooth Woodbine away from the laughter, the flirting and the flowing glasses of fruity champagnes. Never has such a hip social group been turned upon so rapid-and-rabidly. Not so long ago, it was the smokers calling the shots, making things tick in the big cities. So much so, that children as young as two were encouraged to brush up on their smoking techniques by practicing on sickly sweet candy cigarettes. And now? Nothing. You can busily go about your day without once stumbling down an alleyway to be confronted by a mob of five-year-olds pretending to have a drag on a well-earned smoke. A genuine shame. 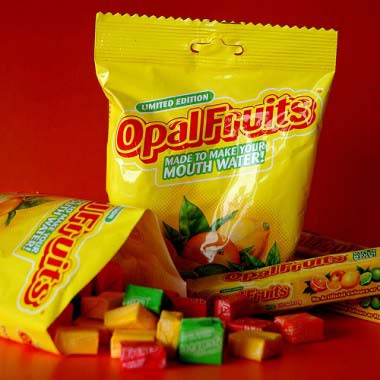 Yes, some of you will argue that the Opal Fruit is alive and well, only now it’s called a Starburst. In many ways you would be right. Only it’s a little bit like being introduced to a woman who looks like your mum, and being told to treat her as such. She’s got a different name, a different vibe, but completely identical features. Unfortunately, here in the vast and sprawling Interestment offices, we’re staunch traditionalists, so we would still take a Marathon over a Snickers, our actual mum over this strange robotronic impostor, and an Opal Fruit over a Starburst. After all, were it not Opal Fruits that were made to make your mouth water? Yes it were. Yes it were.