Only one of these men made it… 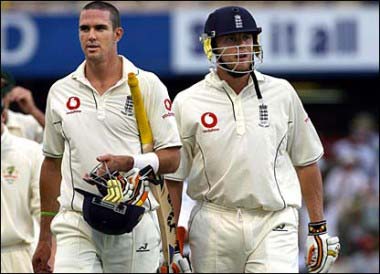 It’s always a treat to hear from a member of the growing Interestment family, and today it’s the turn of Betfair‘s Josh Allen – a man who knows more than a little about sport, betting, cricket and gambling. He had this to say about the next Ashes test…

England may have won the second Ashes Test to take a 1-0 lead in the series but at times the coverage at Lords was more Casualty than cricket match. Indeed the skills of Charlie Fairhead and co would have come in handy as Pietersen, Flintoff and various others limped around the pitch.

It’s fortunate for England then, that Strauss’ troops were given nine days to recover. Not quite fortunate enough for Kevin Pietersen mind; the flamboyant number four has been ruled out for the rest of the series after undergoing surgery on an Achilles problem. Fellow 2005 Ashes winner Ian Bell will take his place.

Warwickshire batsman Bell had a difficult time of it back in 2005, scoring just 171 runs in 10 innings but his nemesis throughout the series, Shane Warne, has since retired and captain Strauss assured BBC Radio 5 Live that Bell is up to the task.

“We’re fortunate to have Ian waiting in the wings” said Strauss.

“We have really high hopes that Ian Bell will be a big player in the team moving forward and he will be determined to take his chance.”

One man that has been pieced together again is Andrew Flintoff. Quite how he keeps going is a mystery to one and all but thanks to seemingly Terminator-esque regenerative qualities, the Lord’s hero is due to throw himself at the Aussies once more. Furthermore, in order to leave Flintoff out, the England selectors would have to find somebody brave enough to tell him. With this in mind Strauss said:

“He’s absolutely determined to play in these last three Test matches and it will take something pretty dramatic for him not to take the field on Thursday.”

Of the remaining Lord’s victims, Graham Onions has shaken off a knock to play, while another Graeme with a peculiar surname (Swann) has shown no signs of post traumatic stress, after surviving a barrage of aerial missiles from Australian axeman Peter Siddle.

The third Test gets underway at Edgbaston on Thursday 30th July at 11am.

For now, make sure you’re keeping a close eye on the Edgbaston Test odds, before any Third Test betting and check out Betfair’s new fanvfan site to get you in the Ashes mood!