Still our number one! 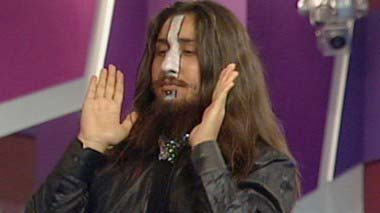 A person’s outfit can say so much, and the Big Brother inmates are beginning to hold a magnifying glass up to the inner workings of their minds with some very curious fashion decisions. Charlie – a man who failed to stay silent for an entire minute – has taken to dressing like Sean Penn playing the part of Andrew Ridgeley in a Wham! biopic. Sophie – the glamour girl who speaks from her nose – appears to have completely given up, and looks homeless. While Freddie the posho is never without a coat and hat, which suggests that he is ready to leave at any given moment.

Karly is obviously comfortable with her place in the house, as she refuses to dress beyond a minute set of underpants, while Siavash – still the Interestment favourite – appears to be spearheading a toga revival. Good for him, good for him.

Elsewhere on the inside, Marcus has failed in his bid to create the most revoltingly mismatched couple since Julia Roberts married that country and western singer who had a face like a cheese and onion crisp, and Kris is all set to meet Davina on Friday, having spent the last few weeks telling Freddie to shut up every time he so much as coughed.