Is this the coolest man in Wimbledon? 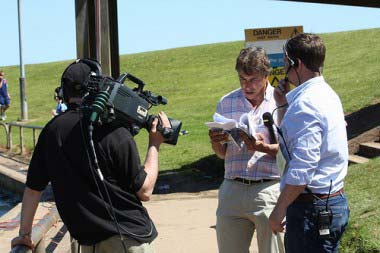 It’s a big day for Muzza, as he sets out to one-better Tiger Tim – who, incidentally, appears to spend the evenings casually with his tie off, listening to reggae in a field with Johnny Mac and that hippy Inverdale. How we long to be in their little gang, sitting around – probably stoned out of their minds – digesting the day’s tennis. Great guys.

Viewers who saw yesterday’s action will have witnessed one of the greatest semi-finals ever, when Serena almost got done by the Russian in a tennis-based remake of the Cold War. And about ten minutes after their epic, Venus was already showering herself off and shaving her astonishing legs having just humiliated the world number one in about eight minutes flat. It all kick-started a very heated commentary-box debate about quality versus quantity, before Sue Barker butted in to tell the nation how much weight Andy Roddick has lost in the last year.

Elsewhere, we enjoyed a peak at Andy Murray in training, where he likes to play a strange version of football, using a tennis ball and the net. Most startlingly, he appeared to be smiling and having a great time while dicking around with his training chums. And then the BBC microphone was thrust into his face, and once again, this cheerful young Scottish lad morphed into a grumpy little goth who didn’t ask to be born, alright. Someone needs to cheer the hell up and join the Inverdale/McEnroe/Henman bongo circle.