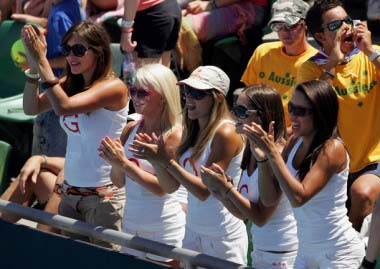 It’s was a gutsy Hewitt showing, out there, slugging it out with Roddick, but in the end the man with the astronomical serve put paid to the little surfer-looking chap at the other end. Still, it’s not all bad, Wimbledon’s loss is every Walkabout pub in London’s gain, as their yellow t-shirt brigade returns to drinking as usual. They now need only wait for a few days before they can squeeze back into their sweaty unwashed t’s and bring down the quality of Ashes support a notch.

Elsewhere at SW Whatever-it-is, Federer made Goliath look like a chump, as he swatted away his gargantuan serves in the manner of a juggernaut smashing into an ant, and Andy Murray wafted around the court with a look on his face more in tune to an awkward teenage boy reluctantly attending a gay wedding. Still, both men won, and both men will presumably be going toe-to-toe in the final. In all of the crazy Andy Muzza frenzy, people appear to have forgotten that Federer is still there, and he’s got a relatively good record here.

Anyone who had the pleasure of the BBC highlights might have noticed Inverdale treating his pals McEnroe and Tiger Tim to an evening glass of cool fruity Pimms. Come finals day, there’s a good chance they will be sitting around a sunset bonfire sharing a joint. 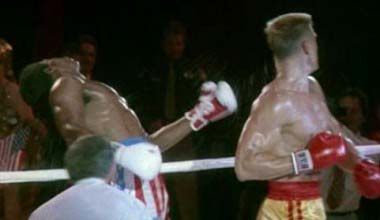 Meanwhile, over on the lady’s side, everyone will be hoping for a Williams final, even though Serena appears to be up against a Russian woman with thighs like big metal oxygen cylinders. It’s slightly reminiscent of Ivan Drago versus Apollo Creed. The whole thing cheerfully enjoyed by Cliff Richard and Cilla Black, who join Jimmy Tarbuck in the list of magnificent British celebrities who love watching tennis.