The new Posh and Becks? 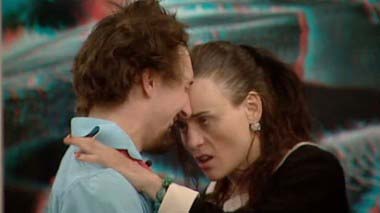 If you spend enough time with people, you’ll notice that they begin to develop some very curious behavioural patterns. That’s because human beings do funny things when they know they’re being watched. Just flick through a random bundle of photographs, and you’ll notice that you pull weird faces whenever someone points a camera at you. If that camera keeps going, like the ones in the Big Brother house do, your bizarre actions will increase multifold.

Now week three or four, Angel has really come into her own as a Gollum-type character, dressed as a London bicycle courier. She wanders the house, either casually telling perfectly thin people that they are grotesquely fat, or when she’s not doing that, she appears to be flirting with Freddie. Freddie, incidentally, who believes that in the real world, the pair would have definitely mated by now. Should they ever procreate, there’s a good chance that the offspring would be actual rats. Posh Russian rats. But rats nonetheless. It would be a bit like Rosemary’s Baby.

Elsewhere in the house, Sree has transformed himself into Russ Abbott’s Scotsman, while Marcus has forgotten the cameras completely during shower time, where he can be found sanitising himself using kitchen equipment. Yesterday he used a scouring pad to scrub muck from his upper body, pretty soon, it’ll be Cillit Bang for genitals, Fairy for underarms. The trauma of having to cut a rabbit’s penis off during the Henry VIII task could be responsible for these acts of bathroom self-harm.

All the while, Kris and Charlie have been singing a medley of chart hits, Karly has been wandering from mirror to mirror wearing just underpants and a bra, and Lisa has been telling all who will listen that the key to success in this world is to never change, and just be yourself. Ironically, by following her own advice, she has no chance of winning the show.

Tonight it’s Freddie versus Angel. Angel looks to be toast.

The Interestment favourite continues to be Siavash.