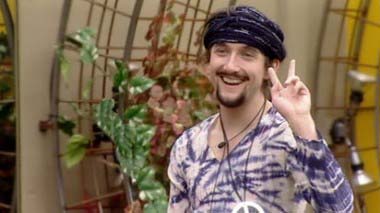 The Big Brother house really brings out the bisexual in a man. Just this week, Sree has turned his attentions from Noirin – the Irish girl who lives her life by the Ten Commandments, ignoring the “thou shalt not get thy breasts out for cider” one – and now he appears to be all over Charlie, the gay Geordie played by Sean Penn. Kris also seems content bathing with Charlie, and Siavash burst into tears like a wife being handed divorce papers at Christmas when Ciaron was ushered from the show. It’s strange. But not as strange as watching Marcus – the hairy one who struggles with non-chatroom-based communication – puckering up his left nipple so that Sree could get stuck in during a game of dare-dare-or-dare.

On the fashion front, a few interesting moves are being made. Karly, who sounds like she might be Sir Alex Ferguson’s voice coach, has given up on trousers altogether, and now just slopes around the house in a pair of underpants and a top. Angel has modeled herself on one of London’s many bicycle couriers, and Sophie – the glamour girl who always sounds like you’ve walked in on her crying – has really let her hair go. It looks a bit like Russell Brand’s, only in negative.

Elsewhere in the house, Sree appears to think that Big Brother might have a quiet word with people for him, and Freddie revealed that when he has parties at home, it’s all “facepaint, alcohol, lasagna!”