Who uses these stupid things, huh? 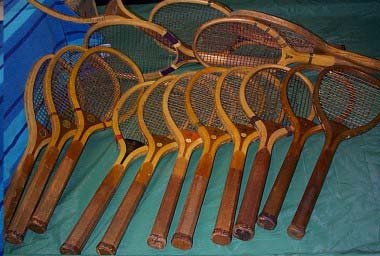 It’s never with anything less than utter elation that we hear from a member of the throbbing, bulbous Interestment family, and today Rory thought he’d drop by to tell us a few interesting tennis facts. It’s a total pleasure. He had this to say…

We all know what Wimbledon means – strawberries, cream, rain, cream mixing with rain, Cliff Richard, Sue Barker in a sexual frenzy, John Inverdale striding around the grounds flanked by massive security guards, that funny little man Andrew Castle from GMTV being on the TV more than usual…

But there’s probably loads you don’t know about it too. Like when a Briton last won it, what colour the sanitising tablets are in the urinals of the men’s changing rooms, or what year someone last used a wooden racquet. Well, wonder no more, dear reader. The answer to at least one of those questions is to be found below, in our round-up of strange and mildly diverting Wimbledon facts. Sit back, relax, unbuckle your belts, and learn. 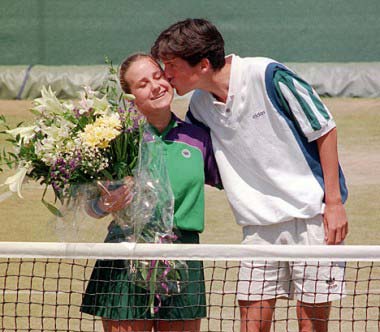 – In 1995, Tim Henman became the first person in the 120-year history of the tournament to be disqualified. After losing his temper, he smashed a ball away in anger… straight into the face of an innocent young ball girl. He gave her some flowers and licked her face to say sorry (above).

– It is illegal for married women to win the singles title. An exception was made for Chris Evert in 1981. 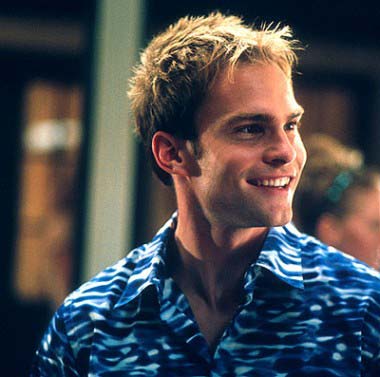 – Two-time Wimbledon finalist Andy Roddick now counts a London cabbie among his best mates. They first met when Roddick was a passenger in his taxi during the tournament six years ago, and they’ve kept in touch since. Stephen Little was even a guest at Roddick’s wedding earlier this year. To this day, Little can often be heard asking his friends “You know who I had in my cab the other day?” before going on to tell them all about how he and Stiffler out of American Pie are now top mates…

– During World War II, a bomb struck centre court, doing huge damage. Unfortunately, Cliff Richard was only a toddler at the time and he was nowhere near the scene. 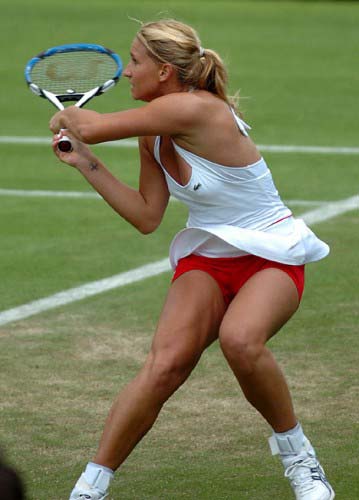 – Competitors at Wimbledon must adhere to an all-white dress code. However (much like schoolkids who attempt to subvert uniform protocol by wearing their ties the wrong way round with a ridiculous oversized knot and stumpy tail), players often look for quirky ways to get around the strict ruling. In 2007, Tatiana Golovin (above) made a mockery of the rule by donning pair of red knickers under her dress.

– A man dressed as the famous Womble (of Wimbledon) Orinoco once attempted to gain entry for free on the final day, citing his status as a local dignitary as justification.*

One Response to Interesting facts about Wimbledon