Some gems missed out… 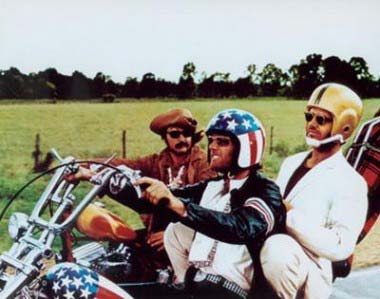 Hey man, the 1960s. How about those! Everyone was naked in a field, smoking grass cigarettes using little tweezers. Then, in the evenings, they’d all pile into a camper van to drive up to a lake to guzzle loads of acid and have group sex on some rocks – all the while quoting Revelations to a screaming guitar backing track. It was far out. Everyone had long hair, man. Everyone. Pretty cool times. Can you tell that we weren’t there? We have, however, seen most of the films, and coming up with a top four was a very unhip and, at times, emotional experience. Just missing the cut were Easy Rider (pictured), Bonnie and Clyde, The Ipcress File, Planet of The Apes, Midnight Cowboy, and The Guns of Navarone… 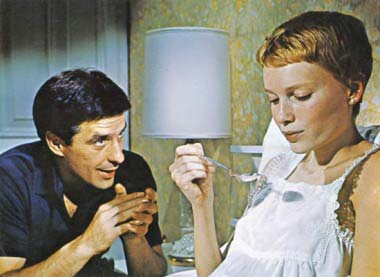 A completely terrifying film, even the trailer is chilling. Rosemary – played by Mia Farrow – and Guy move into an apartment building in New York, and it isn’t long before she’s been date raped by Satan, and his career is on the up and up thanks to a spot of soul selling. Farrow is career peaking throughout, as she grows more and more gaunt and spooky, craving raw meat through a very unusual pregnancy. A Polanski classic, and one of the scariest films ever. Interestingly, Jack Nicholson was almost cast as Guy, but just missed out.

2. Jason and The Argonauts 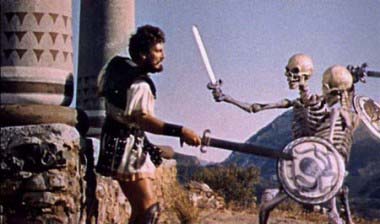 If you’re a Ray Harryhausen fan, and stop-motion animation is your thing, then this is quite possibly the greatest film you will ever see. Jason and his squad of Argonauts are on a mission to find a really expensive golden jacket (or fleece), but the Gods are angry, so their paths are littered with great big monsters, flying things, and skeletons with swords. A brilliant, brilliant movie, adventure films are rarely better. It keeps The Guns of Navarone and One Million Years BC out of the top four.

3. Butch Cassidy and the Sundance Kid 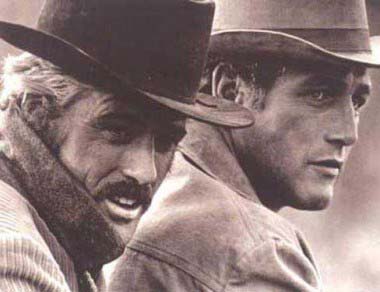 The 1960s heterosexual version of Brokeback Mountain – in that the two stars were lusted after Hollywood hunks, playing cowboys. There was no mutual man activity, however. No fishing trips. Instead, Redford and Newman play bank robbers, who mess up and have to go on the run from a posse. Cue lots of action, sexy brothels, famous bike rides, and Burt Bacharach doing a fine job on the soundtrack. 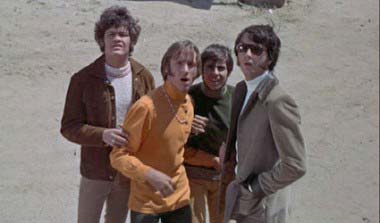 Of course, this being the 1960s, there were plenty of freaky psychedelic movies to chose from – Barbarella, Pych-Out, Easy Rider. But this one takes the biscuit for being totally weird, occasionally excellent, and for proving that The Monkees were actually a pretty fantastic pop group. It was written and produced by Jack Nicholson, and features cameo appearances from Dennis Hopper, Frank Zappa and Sonny Liston. It was so-called with view to making a sequel “from the film makers who gave you Head”. Or so they say.