Might these two be the new Ross and Rachel? 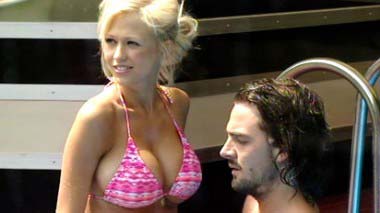 Like a great big inflating balloon filled with custard all the colours of the rainbow, the Big Brother tensions are set to erupt, splurging into everyone’s face. Hatred is brewing for poor Sree – a man for whom confidence is very very important. Just last night, Karly made no bones about telling Sophie that their beautiful prostitute impressions are wasted on such a terrible loser, while kindly Freddie thought it time to calmly explain to the unpopular Indian the exact extent of his dislike for him. Sree took it as anyone in his position should – as a compliment.

Elsewhere in the house, Angel endured the most depressing Russian birthday party imaginable, while Kris – who, by the way, can feed three people with just one tin of beans, like Jesus could – and Sophie spent nineteen hours silently planting feathery caresses on one another’s sensitive, restrained bodies. There is a good chance that Kris mustered a full erection just by touching her shoe. The Interestment crystal ball predicts that they will be smearing giant handfuls of house margarine into one another’s hungry buttocks before week six.

It all got a bit too much for Saffia, who apparently decided that she was being a bad mother by continuing to appear on television, so she upped sticks and left. Probably quite a good move for a thin lipped should-be-HR worker, who had absolutely no chance of spending the final night enjoying a fireworks display.

And onto eviction news, where it’s Freddie against Sophia. Freddie did himself no favours by detailing the enormity of his brain, hence his lust for sleep. But Sophia looks dead set to go, having fallen into the age old trap of insisting that she knew she’d be up for eviction, she knew why, and she knew exactly who nominated her. Big Brother voters can’t stand mind readers or warlocks. The tiny little lady is toast.