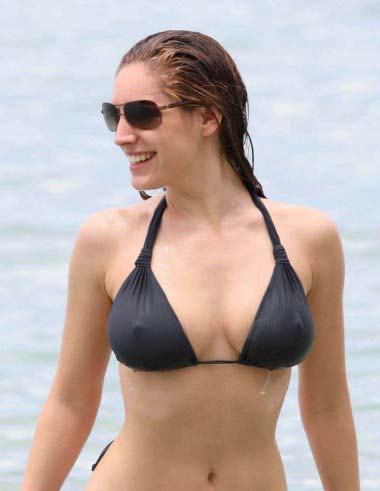 If you’re braving public transport this evening, prepare for an awkward, stunned silence. Kelly Brook has been photographed, on a film set, in a bikini. A bikini so shiny and red that King Cedric the Shiny would have definitely worn it when he was King of Russia, way back when. Before the whole revolution. It’s that shiny. Showbusiness desks have been quivering under the weight of such magnificent photographs, although one showbiz journalist in particular is appalled to see that they also feature a young American actress called Riley Steele, who has starred in all kinds of dirty films. What kind of people is Brook hanging out with now?

Elsewhere in the world, Posh Spice has blown everyone’s minds by turning up at an airport wearing a very savoury dinner jacket with some Daisy Duke style hot pants. Was she confused when she got dressed this morning? Or should we all be doing this now? Big throbbing showbiz minds are still discussing this with screaming fashion circles. We will get to the bottom of it. Plus Yasmina from The Apprentice is now the actual apprentice. Not stroke face Kate, who we thought was going to win.