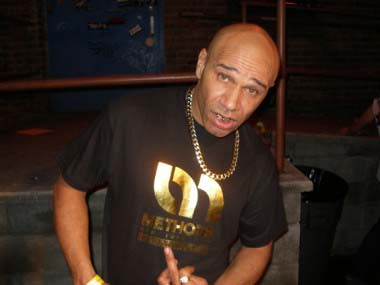 It’s with total and unreserved elation that we welcome Hip Hop Sam back into the Interestment fold. He’s been off the scene lately, spending nights rifling through his thousands of sleek vinyl records. Today, he’s provided an interesting historical lecture about Drum and Bass music, and how it really came about. He had this to say…

We’ll forgive the Rebel for making awful pop-rap song Street Tuff, partly because when he preformed it on Top of the Pops he shouted “am I a yankee?” and we all cheerfully shouted “no I’m a Londoner!” back at the telly, but also because in 1990 he released a b side, Coming On Strong, that merged bleeps with drums, bass, and a bit of talking in strange new language, called Ragga. He later went on to release the Drum and Bass classic Conquering Lion under the name Code Red. Bo? Exactly.

Originally from Hackney’s s Heatwave Sound System (alongside future Drum and Bass great DJ Hype), Shut Up And Dance (PJ and Smiley) made a number of mistakes in their career including the terrifying release of  Raving I’m Raving – a record banned the second it was released thanks to copyright naughtiness. They also appeared topless and greased up on their debut album cover, which is quite frankly a big no-no. However they were among the fist to mix House music with breakbeats creating early Drum and Bass.  Above is the track Spliffhead – produced by Shut Up And Dance for the Ragga Twins, everyone’s favourite brothers.

There wouldn’t’ be any Drum and Bass music without drum solos from early funk bands. Most of these drummers were fat, sweaty men with kind faces, and of course excellent rhythm. The best example of a breakbeat is the break from Amen Brother by The Winstons, which has been used in almost every single Drum and Bass track ever created. It’s located at around one minute twenty-seven seconds.

Before Drum and Bass, ravers were annoying. They used to take vast quantities of the evil drugs – acid and ecstasy – and then danced around sweating, gurning, and wearing Global Hypercolour t shirts and yellow smileys. They were an embarassment to our once proud nation. 4 Hero put a stop to this nonsense with the release of Mr Kirk’s Nightmare. The record was based on a cop telling Mr Kirk that  his son had “died of an overdose”. This made all these grinning imbeciles feel frightened and paranoid… thus paving the way for the darker sounds of Jungle. Rewind? Yes please.

One Response to Interestment’s Top Four: Records that kick-started Drum and Bass