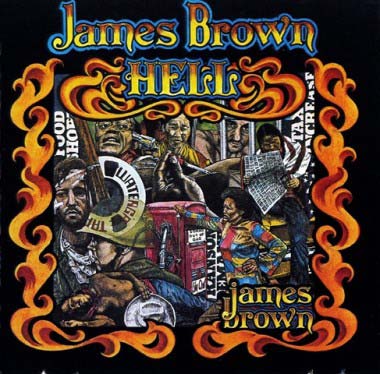 Presumably as a cap doff to the artist Hieronymus Bosch, James Brown created his own version of The Garden of Earthly Delights for his Hell album in 1974. Bosch fans will already be familiar with his cruel and terrifying depiction of life in eternal damnation – pigs dressed as nuns, daggers thrusting through giant ears, naked men impaled on mandolins, demons everywhere. It’s one scary 15th century vision, with more than a hint of Salvador Dali about it. And so to The Hardest Working Man In Showbusiness and his painting of what hell must be like. Well, there’s a soldier, a junkie, a big nod to Vietnam, a Watergate reel-to-reel, a man behind bars, and the words Food Shortage and Tax Increases literally spelt out. Most startling of all, however, is the image of a woman standing in the garage forecourt, unable to fill her car up. They’ve run out of petrol. What next? A strike at the Ginsters factory? Now that really would be hell. Here’s a brilliant track from the album.

When moustaches go RIGHT, No 11
Who wants some more?