No room for Mr Topless… 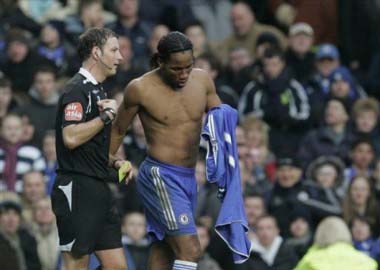 It’s always magnificent to hear from a member of the fine Interestment family, and today Eliot – a keen wit, with an eye for sports – has turned his arched eyebrow onto the world of football. He had this to say…

All too often these days, a terrible tackle is accompanied by chest-beating apologetics, and the claim from the player, “I played the ball ref”, and from the pundits, “no malice was meant.” Austria remains a no-nonsense sort of place; authoritarian enough to cosy up to Hitler in 1938, but as history has always simply blamed the Germans, the approbation and guilt hasn’t washed it all away yet like their friendly, sausage-loving neighbours. In that spirit, here is the LASK Linz goalkeeper, keeping his eyes firmly on the player, and even waiting until the ball had sailed firmly out of play before assaulting the opposing centre forward. Amazingly, the keeper stayed on the field to face the penalty. Didn’t save it mind. That would have been rubbing it in.

Here though is a man who does know how to rub it in. Not content with giving away a blatant penalty in the FA Cup Semi Final, an appeal waved away by Mike Riley (why is that expression waved away always used – it makes referees sound awfully camp), old Jags landed the knockout blow in the shoot-out.

See Lorik Cana (below) to see why this Lorient full back makes this week’s cut.

And see Diego Souza (below) to see why the Santos centre-half has been summoned to this illustrious side.

Proving casinos in the North aren’t just the preserve of ostentatious, seedy, preeners… oh hang on a sec. Casino 235 in Manchester was the venue for Ronnie to drop over 1k a time on the roulette tables according to yesterday’s Daily Mail. Red or Black Ronaldo? All of which is a nice change from the option of Red or White he will be dithering over quite publicly this Summer.

Isnt it annoying when a throw-in decision goes against you? Here is Marseille’s Albanian skipper Lorik Cana holding the ball a little too tight, much to the chagrin of Lorient’s le Lan. Incidentally, what is the French word for chagrin? Leave it lads – c’est ridicule apparently (sound required).

Currently squiring James Blunt’s sister, a lovely looking blonde by the name of Daisy Blount. No – that isn’t yet another typo from the easily distracted Interestment editor, that is genuinely the family surname, which James doctored so he wouldn’t sound silly. Insert punchline of your choice.

According to the august journal that is the Daily Mail, Blount runs Belvedere Properties, a small private concierge business that locates luxurious chalets, villas and boat trips for its wealthy members. Said paper goes on to add unnecessarily, “This enterprise was started by her parents.” Great – can’t think how she managed to land that gig.

You know the drill by now kids.

And you thought Zinedine Zidane over-reacted to something whispered gently in his ear. Here is some harmless chaos from Palemiras v Santos. Having just come on for the away side, defender Domingos ran straight over to Diego Souza, almost as if his sole purpose for joining the game was to antagonise his compatriot. Souza took the bait and retaliated violently to some obviously choice words.

Having rolled over like he’d been thumped by a London policeman, Domingos continued to attract Souza’s ire even after red cards had been shown, and the frontman eventually broke free of team-mates clutches to re-enter the field and attack Domingos properly this time

The Liverpool striker may go on to have a long and fruitful career in front of goal, but it is unlikely he will bag a goal as simple as this third in Liverpool’s 3-0 first leg FA Youth Cup semi-final, as Blues keeper Dean Lyness decided to use the first televised match of his life to make the biggest blunder of his career to date. Wikipedia informs us that Dalla Valle’s father was the head of a mushroom company, and perhaps Lyness had been dabbling in a few ‘shrooms prior to kick off.

Finally it appears that someone has pointed out the emperor doesn’t have any clothes. Berbatov was a flat-track bully at Spurs – he only scored one goal against clubs in the top half during his first season there – and has now been found out. His style of play is sulky and enigmatic apparently, although I think we all know that if Mr Berbatov was African and played in the same languid way (a la Didier Drogba) these adjectives would soon turn to, disinterested and lazy.