Not to be confused with beer… 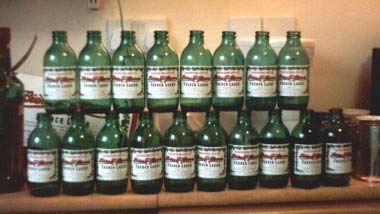 Some of you might share an office with a gentleman who has decided to dust off his flippy-flops, pop the long shorts on, and wear it all to work. It’s a brave, premature move. It’s also the sign of a barbecue guy. They’re different to us picnic folk. To them the summer is a long stretch of veering from one drunken pool of sick to the next, stopping only to stuff sticky chunks of half-cooked meat into their drooling mouths. They often wake up full of shame and regret. Whereas, picnic people know how to correctly behave themselves, and any vomitting will take place discreetly into a bush. It’s a more sophisticated crowd, who know that an afternoon meal should last at least four hours, and that drinking is a prolonged marathon, not a competition with a buck-toothed Australian called Glen.  Picnic season is by far the best of the culinary movements, so we’re celebrating it by suggesting simple treats that even babies could understand. Today, small bottles of biere.

If you’re passing on the wines or Pimms, you’ll have to drink a more sophisticated kind of beer – namely a small bottle of biere. These can only be bought in big supermarkets like Sainsburys or Tescos, and always come in packs of ten or twelve. A decent drinker should be able to polish off at least eight of these in one sitting – the equivalent of around four pints. Hence, for a decent sized picnic, you will need:

1. Around five or six mini-cases of biere.

2. Some water to combat dehydration.