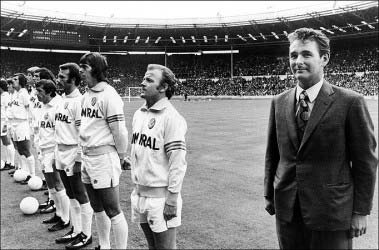 Just as the rain started coming down, threatening to dampen our cheerful Monday spirits, in pinged another dose of sports writing from excellent contributor, Eliot, to lift our mood. Great stuff. He had this to say about the weekend’s 3-4-3…

For the minority of readers for whom the name is not interesting enough, the Benfica goalkeeper also happened to save three spot kicks after the Portugese Carlsberg Cup Final went to penalties on Saturday.

A man as deserving of his weekly payslip as Fred Goodwin. ReoCoker’s blunders cost Aston Villa the first three goals shipped at Anfield this weekend, although he, disappointingly for the perfectionists amongst us, wasn’t involved in the final two goals of the game. For those bandwagonners who have raced out and put what remains of their mortgage on Liverpool for the title, look at it this way. Nine goals against Manchester United and Villa sounds good. But both vanquished sides played with ten men, and the nine included 3 penalties, 3 goals from free kicks, two from goal kicks and one big ricket from Vidic. Money wasted – its United’s title.

To paraphrase S Club 7, there ain’t no derby like a Krakow derby, and the city which rather optimistically is twinned with Milan according to its official website, produced another Krakow Cracker on the weekend.

In pretentious acting schools across the country, strange-looking creatures wearing scarves indoors teach various emotions – hurt, joy, revulsion to name but three. Abdou Mangane obviously paid careful attention to Lesson 17 – bewilderment. After snapping Valenciennes’ midfielder Jonathan Lacourt in half, the expression on Mangane’s face is akin to what one would expect had the referee produced a large tub of Ben & Jerry’s from his top pocket. Indeed, rather than leave the crime scene in a hurry, Mangane then hangs around for an age, standing his ground as if needing anatomical proof Lacourt’s limbs are no longer in one piece, before eventually departing.

Typically a goalkeeper but the Hapoel Tel Aviv man’s penalty prowess displayed here qualifies the Nigerian to feature as what a seven year old would call, a rush goalie. But what sort of two-bob website do you think this is – leave that rhetorical. A keeper scoring a penalty isn’t interesting enough for us. We get sent tapes of number ones banging away pendos as often as we get the urge to urinate. What makes Enyeama a star this weekend, is this tremendously unnecessary hurling of a ball at Bnei Yehuda’s Kobi Moyal, in the closing seconds of the big match in the Holyland this weekend.

In more modest times, a broken engagement was the scene for tears, embarrassed calls to the caterers, and a period of quiet introspection from the couple regarding what went wrong. We live in less modest times. Following the wholly unexpected ending to Jermaine Pennant and Amii Grove’s life-affirming romance, she put his ring on ebay, whilst he started ramming a girl from Hollyoaks. Sigh.

Yes, we thought he had retired too. And although this left foot volley is perfect, and a 4-1 win in the Stadio Olympico is a true occasion to behold, there is no need for such vigorous bottom patting from the left back Christian Molinaro.

The opening week of the MLS – one would think it exactly what America needed to distract itself from the worst economic situation since the Great Depression. Dogs caught Frisbees, Kenny Cooper gave Dallas the lead against Chicago with a brilliant long-range strike, and a nation turned over to watch Oprah.

In honour of the Damned United released on Friday, here is a terrific Brian Clough story as told in Roy Keane’s autobiography, cleverly titled Keane: the Autobiography.

In 1992, Graham Taylor, then the England manager, had come to watch Clough’s side to check on the form of England regulars Stuart Pearce and Nigel Clough. Before leaving the dressing room after the match, Clough snr told Keane (back then a mere impressionable youngster) to wait outside his office, and warn him when he saw Graham Taylor approach. He was also to inform him when he left.

Twenty minutes later, a suited Keane spotted Taylor emerge around the corner, striding chirpily to see Clough, keen to discuss the latest form of his English stars. The young midfielder dashed into the office – “Mr Clough, Graham is around the corner.” Leaping out of his seat, Clough turned off the lights and lay down under the desk.

Taylor entered the office, and seeing no sign of life, assumed Clough was still in the dressing room with his players, and hence waited outside with Keane. Taylor and Keane exchanged awkward pleasantries for two whole hours whilst Clough remained under the desk, before Taylor finally piped up, “Tell your manager I popped round would you. I have a train to catch.”

As Taylor left the building, Keane told his manager, as instructed, that the England boss had gone. Casual as you like, Clough got up, brushed himself down, and said, “Thank you young man. He does go on a bit does our Graham.”

Clough himself of course was no mug as a centre forward, scoring 197 goals in 213 games for Middlesbrough.

The regular feature now of a goal from the Belgian League, just to ensure nobody forgets about the country. Here is Dender’s Bosnian striker Admir Aganovic, equalising against Westerlo, in a game they would go on to lose 3-1.