Is there any better feeling? 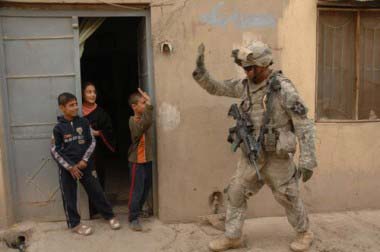 Music, don’t underestimate the power of it. It can make people do strange things. For example, next time you’re rowing with your life partner about a lost set of keys, have someone cue up a love song like Lady in Red – within seconds you’ll be a smoking heap on a moist living room floor. Similarly, if you’re being mugged by a gang of hoodies, just start humming some classic Sean Paul riffs. They’ll be so lost in the music, they’ll completely forget to stab you. But far greater than either of those examples are the songs that bring out a gentleman’s inner high school jock – the ones that make your boss want to share an enthusiastic high five with you. These are the four best, as pointed out by friend of the site and excellent maker of comments, Spencer…

Something about the scratching, the electric beats and the simple synth make this song excellent for high fiving. It’s also the kind of track that grown men are convinced they can breakdance to. They often can’t, but can make up for it by going for a double high five with the nearest recipient – it’s a move also known as the “high ten”. That’s how good this song is.

Forever linked with Top Gun, this song would be equally brilliant without the film. It’s got the word “danger” in it, there are about a million guitars power riffing at any one time, and Loggins is literally career peaking throughout. In fact, just thinking about it makes you want to run down the street pumping your fist and high fiving old women in shops.

Cleverly, these art rockers from America included a whipping sound in this track. Anyone familiar with high fiving knows that when done to perfection, the connection makes exactly the same noise as a whip being cracked. Hence, the subliminal messages in this song demand that you slap hands. Absolutely demand it.

A song that celebrates the joy of the moment, just hearing the opening chord makes you want to start frantically high fiving anyone you can lay your hands on. In that sense, it’s a very dangerous track.

One Response to Interestment’s Top Four: Songs to High Five to