Wow, singer has other talent 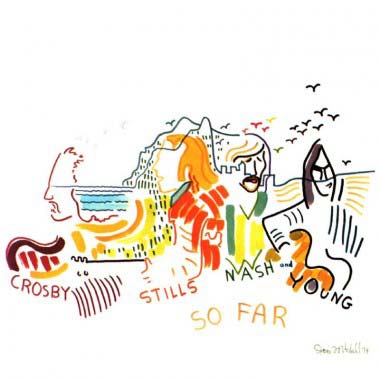 These days, singers are more commonly known as “artistes”, and it’s no surprise should you find Jennifer Lopez not only singing a mediocre pop song, but also appearing in a poor/mediocre film, and possibly penning some kind of book. She is, of course, just an example. The same theory could be applied to practically anyone – it’s only a matter of time before Duffy crops up in a Mike Leigh film, or Howard from Take That writes the great British novel. But, before everything became so absurd, the popular song writer Joni Mitchell was already proving to be quite the multi-talent. Not only could she pen impressive songs about big yellow taxis, but she was a dab hand at caricatures as well. Above is her impressive doodle for Crosby, Stills, Nash and Young‘s 1974 compilation record. Bravo, Joni. Bravo.

Enjoy their music after the jump…