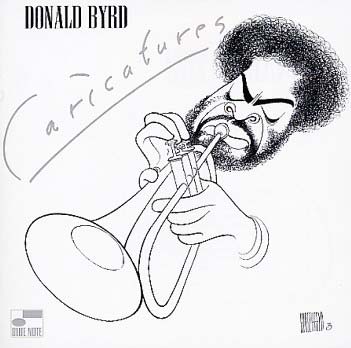 The thorn that has jutted from the bloodied side of Jazz music from around the 1950s onwards, stopping anyone from feeling its true beauty, is that it always seems to take itself so damn seriously. Album covers would either show moody John Coltrane figures lurking in the shadows smoking a cig, or artwork so far out that people would burst into confused tears just looking at it (Mile Davis’ excellent Bitches Brew). Of course, the kind of pipe smoking women who love Jazz wouldn’t have it any other way, but in around 1976, trumpeter Donald Byrd created this totally accessible masterstroke, and the music on his Caricatures record proved to be as cheeky and enticing as the cover. A pure white sleeve, it features a zany cartoon of Byrd himself, complete with big old afro and beard, blowing hard into his trumpet – his way of saying, “come on world, Jazz music is FUN!”. And guess what – it worked. For about eight minutes.

Listen to one of the tracks from the album after the jump.