You should have stuck with Zane, Winslet 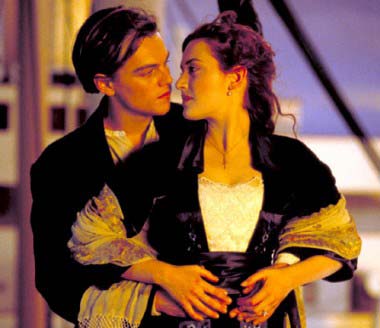 Oh God did we weep during Titanic. The combination of love, Celine Dion, and broken dreams left us crumpled in a tearful heap, unable to do anything but sob and sob for about a week. Why did he have to die? Why? If he’d just held on like he said he would, they could have gone to New York together, got themselves a little apartment, then realised that they had absolutely nothing in common. After all, look at her – she’s a beautiful, feisty go getter. He’s just some chancer who hangs out with hookers, and never has any money for treats. Within months she’d have been begging Billy Zane to give it another go. Begging him. Either way, once the tears dried into salty smears on our wintered cheeks, we got to thinking, and perhaps this isn’t a film that should be watched by impressionable children – here’s what it would have them believe:

1. If you stand right at the front of a boat, hoisted up on a ledge with a perverted young pauper pressing his crotch into your backside, it’s the exact equivalent of flying.

2. Why go first class, with great food, and comfortable seats, when you can go and get pissed with a bunch of noisy hobos?

3. Talking of which – hungry poor people are much happier than rich people.

5. Should you find yourself on a sinking ship, don’t get in the lifeboat offered to you, take your chances against an angry ocean.

6. Allow your lover to freeze to death in a cold bitter sea just centimetres away from you, while you laud it up on a nice bit of discarded wood. With probably enough room for two.

7. Get on with your life, but always imagine that the dimwit you had it off with on a cruise once was probably “the one”.

8. If you have a priceless necklace in your possession, don’t leave it to the struggling grandkids, cast it into the ocean just before you die, so that no one else can have it, you selfish bastard.

9. The ship didn’t sink for nothing.

One Response to Movies setting a bad example No5: Titanic