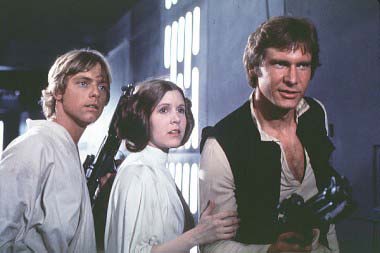 Everybody – literally EVERYBODY – goes mental if you say nice things about the Star Wars prequels. You would be wiser to stand in a city centre repeatedly stabbing a dead and bloodied labrador puppy with a Rambo knife if you really wanted to make friends. But that’s enough about that. The big problem isn’t with the atrocities that ruined people’s childhood memories, but with the original three films – the ones that you’re supposed to like. On the face of it, they might look like sexy extravagant space romps, but if you study them really closely, your children could come away from Star Wars, The Empire Strikes Back and Return of The Jedi having picked up some very bad habits indeed. Here are some of the bad lessons they would learn:

1. If you come across a strange old man lurking in a wasteland, befriend him.

2. If you meet a drunk man and his monster in a bar – where they’ve been drinking heavily – it’s fine to grab a lift.

3. There is nothing wrong with thinking that your sister is totally drop dead gorgeous.

5. Dead people will often speak to you, obey whatever they say.

6. Girls, if you want to make a guy jealous, have a semi-erotic kiss in front of him… with your gay brother.

7. A perfectly decent reply to those three special words, “I love you”, is “I know”.

8. Teddy Bears are stronger than robots.

One Response to Movies setting a bad example No4: Star Wars IV to VI